Cop Gets More than his Badge Polished: Officer Having Sex on the Job Caught on Camera

“And like, I got out of the car, you know, to cool off?  Like, especially my pants?  They get hot around the, uh, front… area?

“So I was outside the cruiser, sorry, patrol vehicle, and, uh, it was taking too long?  Like, I thought if someone, uh, if someone was getting robbed, like, I wouldn’t be able to chase the robber?  Because I was hot?

“But then, like this lady came up to me, I mean, this woman, and she said she was reporting a crime?  Like, uh, she had a tattoo, yeah, like a tattoo and it was misspelled.  The tattoo guy spelled her name wrong, I mean, her boyfriend’s name wrong, yeah. 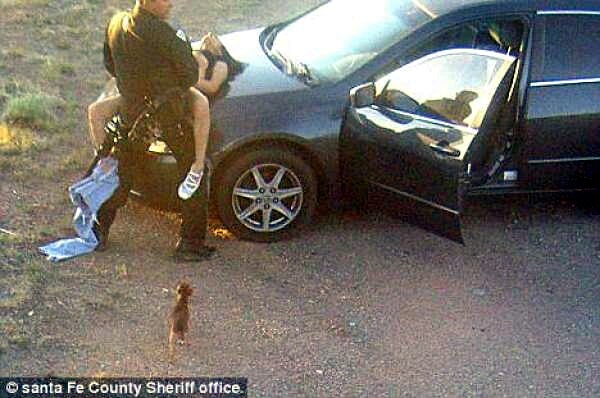 “And she started to show it to me, but like, it was in a private… area?  So I said, hey, there’s a camera over there, and I put myself between it and her, uhm, so she could get some privacy?

“And then she lost her balance and I grabbed her, her and set her on the hood of the cruiser?  But I didn’t have time to fix my pants, and then, uh, you know, e-brake?  Well it popped off just then, and sorta rolled forward, and I had to push against it, uhm, with my pelvis?  ‘Cause my hands were holding her, uh, her arms where I was catching her.

“We were definitely not nailing.  Like, I said, the camera’s at a funny angle… It’s, uh, an optical illusion?

“We were definitely not nailing.”

Heh, Dick Knipfing.  Ok, summary for those of you who don’t want to or can’t watch the video: eight-year New Mexico veteran cop Bert Lopez took a chick out to some private property for a quick triple-x throw-down.  They thought they were only being watched by a chihuahua, but the whole thing was caught on tape and the rest, as they say in my country, is history.

And for the rest of his life, Bert Lopez will be peeling stickers off his car that read “To Protect and Service”.  And all acts of cop sex shall henceforth be known as getting Bert Lopezed.

There is an investigation ongoing, Officer Lopez has not been charged because you can’t indecently expose yourself to a camera (yeah, that standard applies to civilians, we’re sure) and the owner isn’t calling trespassing shenanigans; right now, no department is making any comments.

So do you think he’s damaged the badge?  Should he lose his job?  Is this an indicator of police misconduct or corruption?  Do we have our panties in a twist over harmless cop nooner?

We here at Guns.com believe in dealing with the sticky issues at hand, but not to get mired in them.  We must as always maintain a distanced perspective and moral direction.  And in that spirit, we ask you, what’s the funniest Bert Lopez joke you can think of?