Take a Peek at FNH's Ballista, Even from 1,500 Meters Away

The sniping market is heating up.  More and more, the militaries of the U.S. (and others, uh, probably) are finding out that the skill of their shooters is eclipsing the majority of their equipment, and this has their ire.  Especially SOCOM, which has a real soft spot for the snipers.  At the top of this year SOCOM threw its net out trawling for inexpensive multi-caliber bolt-action precision sniper rifles, or PSRs in the lingo.

And the truth is that as we spend more time reinventing guns, even simple rifles like bolt-action ones, (or maybe especially) we come up with revolutionary new ideas that completely alter what we expect from some of the most basic tools.  If what FNH tells us is true, than this is one such example.

The SPR Ballista is a multi-caliber, bolt-action sniper rifle.  It uses a ton of polymer to cut down on weight, where ton is relative; this thing still sports a mass of seventeen pounds, folded is 40″ long, (49″ extended) and is quite capable of putting “a serious dent in your medical record from 1,500 meters. 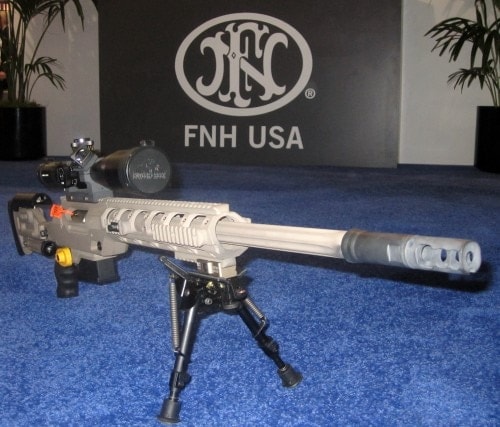 “While no company will share proprietary data, FNH did confirm that many components are made with advanced polymers that are lighter than plastic but stronger than steel. No doubt that will keep cost down. Special coating also reduces thermal signature and corrosion. For example, knowing that steel screws in an aluminum base often weld into place, engineers came up with special material for the screws that can handle significantly more torque and won’t lock up.”

But the we’ll-wait-and-see feature, which is also the most promising, is it’s multi-calibrosity.  It’s chambered for .308 Winchester/7.62 NATO, .338 Lapua Magnum, and .300 Winchester Magnum.  Simultaneously.  The Ballista takes different magazines, uses a swappable bolt face, and has an adjustable barrel that telescopes to headspace the cartridges (and a different barrel for .338 Lapua).  If it works, then it’s genius.  It may even prove to be more reliable and precise; essentially the gun is tailored to the bullet, more so than just a standard rifle.  If it doesn’t work, then, well, SOCOM prolly won’t buy any.  They ain’t the Army.

They’re not alone, though.  Barrett’s working on the same PSR contract, and we all know Remington’s going to try to hold their place in the inner circle; And as cool as the FNH is Barrett’s weighs a scant fourteen pounds, although it’s still being prototyped and, well, only tests out to 640 meters.  It also has an exceptionally short life of 1,200 rounds.  Accuracy International also seems to be working on… something.

So whether or not the Special Operations Command decides to go with the FNH SPR Ballista, we’re intrigued.  What would you spend on a precision rifle that’s chambered in three separate calibers?