The Texas Armoring Corporation makes armored cars.  They guarantee their armoring to four damning degrees of small-arms-proofocity.  Their ballistics materials can withstand anywhere from handguns of all calibers and shotguns, up to and including high-powered rifles firing armor-piercing rounds.

Or so they say, right?  It’s one thing to state that your product works and show off some video of a car getting shot up, then walking into it to survey the damage.  It’s another thing entirely to, as the CEO of the company, crouch behind your bulletproof glass and let an employee shoot it up.

And yet, that’s totally what Texas Armoring Corp. CEO Trent Kimball went and did, by an AK-47.  Pics or it never happened!

As both a demonstration of their trust in their own product and as a publicity stunt, we’ll have to agree that they succeed here.  Give everyone a round of truck nuts!

They do more than just windows, of course.  Their whole-vehicle armoring package is impressive, to say the least.  They measure out the areas of the exterior that requires reinforcement, dismantle the entire care, and shore up or replace every imaginable part with ballistics materials.  If you didn’t know already, car doors are a far cry from bulletproof.

So the next time you’re looking for a company that will turn out a custom Sprinter or armor up any other vehicle to your liking, keep Texas Armoring Corp. in mind.  Of course, if you have to ask how much it costs… Just kidding, they’re actually pretty cheap (for armored cars).  Case in point: they sell used vehicles starting at $37,000.  ‘Course, their 2010 Escalade runs $475,000, but, ah, we’d happily “test” it for a while… 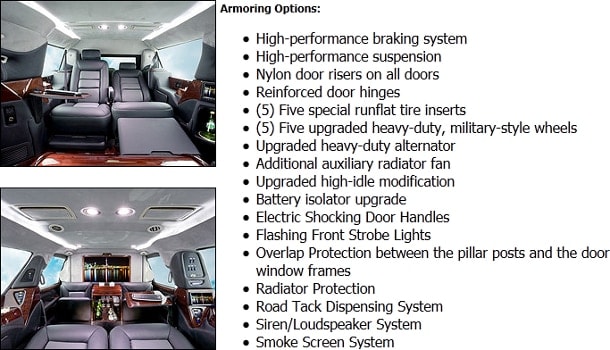