King Samir Shabazz made his media debut in 2008 when he, along with another member of the New Black Panther Party, stood out in front of a polling station in Philidelphia, PA, on Election Day in November 2008.  He was armed with a stick. 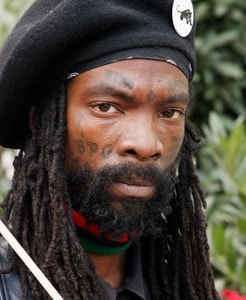 The Department of Justice investigated the matter and both Shabazz and his accomplice, Jerry Jackson, were charged with voter intimidation.  However, for reasons that aren’t exactly clear, charges against the two were dropped.

And, “I hate white people.  All of them.  Every last iota of a cracker I hate em.”

However, Shabazz’s role as public provocateur has been expanded.  That is to say, he now teaches his “avant-garde” self-defense tactics to children.

Some highlights from the video (or lowlights, depending on your perspective) include his obsession with punching, kicking, and even shooting would-be assailants in the groin.

In demonstrating how to free oneself from a chokehold Shabazz gives the following instructions:

“The first thing we don’t do?” Shabazz asks his audience.

“Right,” Shabazz answers stepping to the side of the attacker then drawing his gun pretending to take an open shot at the faux assailants kneecaps.

“Be careful it isn’t your leg!” Shabazz adds. “What I would do, in most cases, go right to the groin… You always want to make sure you are not in the way of your own line of fire.” Shabazz also loads his firearm in front of the audience.  He tells them never to play with guns.

“I am trained to deal with a loaded weapon,” he says, brandishing the loaded firearm.

Shabazz doesn’t limit his instruction to firearms.  Another video shows him giving a tutorial on self-defense with the aid of a machete against an individual with a baseball bat.

His advice is to counterstrike with the machete after the would-be attacker swings the bat.

“Now, I can either go for his fingers and cut his fingers straight off or I can go straight for his wrist,” Shabazz says.

There is certainly a level of gratuitousness to Shabazz’s defense posture.  For example, as he pretends to decapitate the attacker, he says with pride:

“And I can hold his head up high just like that.” 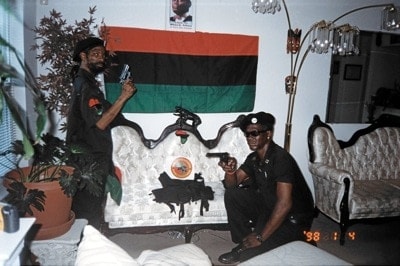