You may recall the event last July, when Canton, Ohio, “police officer” Daniel Harless arrested concealed-carry permit-holder William Bartlett after finding out that he was, like the license says, armed, after threatening to execute him for being stupid.  His reign of threats and insults went on for about ten minutes, in which time he promised to stalk and kill Bartlett; throughout the episode, Harless’ partner, Mark Diels, did nothing.

“I’m so close to caving in your fucking head… You fuck with me…You’re just a stupid human being!  Fucking talking to me with a fucking gun. You want me to pull mine and stick it to your head?”  Yeah, ten minutes of that.

This was all caught on video, and the video went viral, prompting immediate investigation and sick leave for Harless, who has an intimidating history complaints of excessive force.  That combined with the YouTube footage earned Harless the mostest awesomest nickname: Officer Roid Rage.  Despite all the criticism from the press, the public, and other law enforcement agencies, the police union and the Canton city council stepped in to defend Harless and blame concealed-carry laws.

“As long as these laws permit people to carry weapons in the worst of circumstances, in the worst situations, there are deaths waiting to happen.  Either police officers, or citizens, who think that by arming themselves, they’re somehow safe.”

Well thankfully there’s an IA, right?  Not so fast: “A disciplinary hearing for a police officer who threatened to execute a driver has been postponed until Dec. 1 at the request of the union, which says the patrolman has been diagnosed with post-traumatic stress disorder.” Ahem.  What the piss?

“[Police union president Bill Adams] wrote that due to PTSD, Harless would not be able to assist in his defense or participate in the Wednesday hearing.  ‘The progress that Dan Harless is making with his doctor visits would only be reversed with reliving this incident so close to his treatment for his PTSD disability.  When his doctor or the city of Canton’s doctor would clear him for duty, then an appropriate disciplinary hearing should be scheduled.'”  No cause of Harless’ PTSD has been established, although it’s implied that he got it arresting Bartlett. 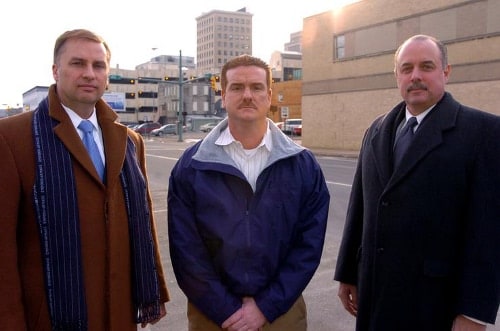 The appeal was shooting for an indefinite delay, but the Canton PD safety director didn’t buy it, and instead postponed the hearing for 90 days.

The department of internal affairs has been exceptionally forthcoming, however, and turned over their initial reports to the Canton press.  One of Bartlett’s remarks may reflect more than just his own opinion: “Let’s just let bygones be bygones. I’ll eat the hundred and five bucks it cost me to get my car out and I’ll never step foot back in Canton, Ohio again.” (Emphasis ours.)

Although we shouldn’t be surprised that he’s going with the PTSD route.  It seems pretty shameless and right up Harless’ alley.  That being said, if he really does have PTSD to the point of lashing out uncontrollably at traffic stops, which also doesn’t seem out of the question, why was he allowed on duty?