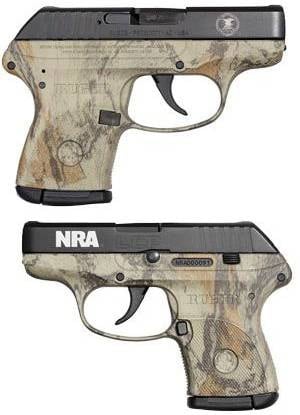 Do you want a .380 ACP pocket pistol?  Do you love the NRA and desire to demonstrate it in a way that leaves no doubt among your peers who you endorse?  Are you a fan of Ruger and their many simple-yet-rugged firearm designs?  Do you need a handgun that’s camouflaged?

Well then man, there is like, the perfect gun for you.  Ruger’s celebrated LCP is getting a palette-swap with NRA colors; namely an ashy camo dip in the style of the NRA, as well as a stark white-on-black NRA stamped into the slide.  We understand that the camo itself is actually patterned off Texas Governor Rick Perry’s chest hair.  The man’s chest hair is basically a living ghillie suit.

Speaking of ghillie suits, we went paintballing this one time with basically just us, a smallish group of guys.  Not enough for a team at the place we were at, so we were issued other random dudes from the parking lot, as the paintball place is wont to do.  And for serious, there was this dude who arrived at the paintball center with his own homemade-freaking-ghillie suit.

Seriously, this is just paintball, how much mall ninja do you have to bring to the woods?  It doesn’t carry well.  Your fern ass isn’t going to look any different splortched all up with pink splotches from ours, it’s just going to be damp and full of crickets. 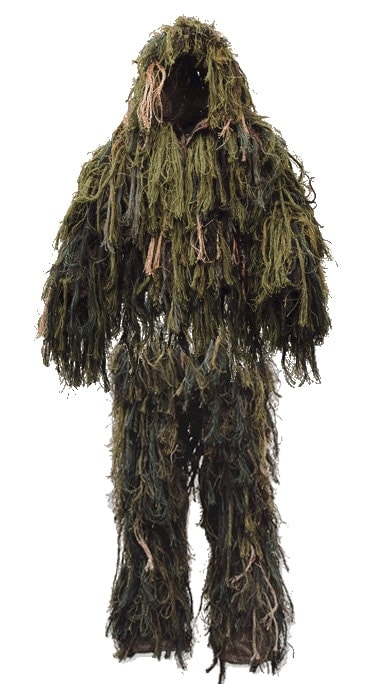 So we were playing this game, like, an all-day set.  Being out in the middle of nowhere, the sets taking as much time as they do, if you sneak up on someone, we used a “touch” rule.  If you pressed the barrel of your gun against an enemy, you made a silent “kill”.  That’s it for you, no paint, no bruise, and you have to lie there “dead” until the next round starts.

Well given our reduced numbers, we were stationed on defense.  There was this fort-like rock outcropping at the top of a clearing in the woods for us to snipe from, while the other team, about triple our size, went on the offense.  We were ready.  They planned well; they delayed their first wave as long as possible.  In fact, it was about forty minutes into the game and we hadn’t seen dude one.  No one was charging the hill, and no one was massing an assault.  Finally, an hour into it, the referee came up and told us we’d won.

Huh?  Fucking Mr. Ghillie.  Right after we’d set up, he said he’d had to take care of something.  Using the “touch” rule, he went out there and fucking “killed” the entire opposing team.  By himself.

Yeah, it turns out he was like, a ranger?  Like, a U.S. Army Ranger.  Dude liked to keep his sneaky skills honed.  Fortunately for us, he went home after that round.  That way we could, you know, play.

The craziest part?  Mr. Ghillie didn’t even own a paintball gun.

He just brought a length of black PVC with him.

The Ruger LCP NRA Special edition is a .380 ACP single-stack pistol with a 6+1 capacity, a 2-3/4″ barrel, is 5-1/8″ long, just under an inch wide, and weighs less than ten ounces, dry.  It comes with one magazine and two floorplates, one floorplate having an integral pinky extension.  It’ll set you back around $350.