The best-kept secret in shotguns used to be the Saiga 12.  For years, they sold for as little as $250, but with the resurgence in shooting sports and a little ho-hum from the ATF and the prices skyrocketed.

At the top of this year, if you could find them for sale, you’d easily drop $800-1000 on an unconverted Saiga.  (Saigas are imported with a Monte Carlo stock and a rotten trigger linkage that most people replace for about $150.  That’s the price you have to pay for an AK shotgun.)

Their prices are coming down but they’re not the smoking deal they used to be.  Then came down the Saiga banhammer in IDPA and there are rumors that other shooting sports might follow suit.  And it’s just not for everyone.  Plus, there are better deals to be had.  Russian deals.

Specifically, the Baikal MP-153.  It’s been imported from Russia by EAA, USSG, and Remington, and it’s a lovely piece of kit if ever there was one.

His ammo is pants!

Yeah, do that with your Benelli M4.  (Actually, we don’t doubt that an M4 would hold up just as well, it’s just that with a $1500 shotgun, no one’s gonna try.)  And don’t think that because they’re cheap, they’re crap.  The receiver is milled, hard-anodized aluminum, the bore is hot-hammer-forged and chrome plated, and the internals are stainless steel.  They’re feature-heavy with a last-round bolt-hold open and an easy-to-follow ventilated rib, and they come with three threaded chokes.  The barrel is threaded and swappable (if you can find other barrels, natch).

Not only can you find these guns for between $300-350, they actually have some advantages over much more expensive shotguns.  Primarily, their ability to cycle.  The gas piston system is heavy-duty and wraps around the magazine tube underneath the forearm, and it’s self-regulating for light and heavy loads.  They really mean it.  The gun has no problem going from 2-3/4″ shot to 3.5″ slugs and back. 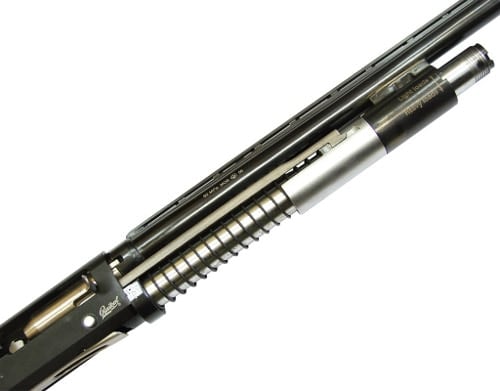 And that’s right, the Baikal MP-153 shoots the big 3.5″ magnums.  If you’re worried about them having a small aftermarket, well, you’d be right.  Even Remington didn’t promote them too heavily when they were selling them as their Spartans.  But they do accept Remington 870 magazine tube extensions (870-specific, not the across-the-board extensions that also fit 1100s, etc.) from the likes of TacStar and ATI.

It’s not a slight firearm.  The MP-153s that are most often imported weigh 7.7lbs empty, and that’s with the lighter synthetic stocks.  They also have long barrels at 28 inches.  ‘Course, all that weight helps when you’re shooting magnum shells.  Capacity is 5+1 with 2-3/4″ shells.

Baikal shotguns are popular all across Europe and the North Atlantic nations, and all the way down into Asia Minor.  They’ve got a track record that’s longer than their effective range and have been proven in just about every imaginable climate.  The MP-153 is no exception and at its price it’s unapproachable.