Report Claims 16,000 Firearms Are Missing from Manufacturers Since 2009

The report discusses several findings based off data collected by the Bureau of Alcohol, Tobacco, Firearms, and Explosives, the most startling of which is:

To illustrate what could potentially happen when guns walk out of a gun manufacturer undetected, the Brady report mentions the Danny Guzman case.  Danny Guzman, 26, was killed in a shooting outside of a Worcester, Massachusetts, nightclub, on Christmas Eve in 1999.  Guzman’s killer used a gun absconded from Kahr Arms by a drug-addicted employee.  As a result of the incident, Kahr Arms had to pay out 600,000 in a landmark settlement to Guzman’s family.

These numbers are likely a vast undercount of guns unaccounted for in gun manufacturer inventories, as they are based on ATF compliance inspections of less than one-fifth of gun sellers each year.

“It is shocking that gun makers are so oblivious to public safety that they lose track of thousands of guns every year,” Dennis Henigan, acting president of the Brady Center, said in a statement. “Given the lethality of its product, the gun industry has a special duty to act responsibly. Instead, it has a scandalous record of carelessness.”

As a result of the ATF’s findings, The Brady Center concludes in their report that in order to crack down on missing or misplaced firearms and to prevent further tragedies from occurring, Congress needs to repeal the Tiahrt Amendment:

Congress should repeal the Tiahrt Amendment that blocks ATF from requiring that gun manufacturers and dealers conduct annual inventories and that shields data about missing guns from public information requests. The threat of civil liability, as in the case of Kahr Arms, is an important deterrent, but gun manufacturers and dealers must also be required to secure their inventory as a condition of receiving a federal firearms license.

But not everyone is buying the implications within the Brady report.  Especially parts of it that directly imply malfeasance on behalf of gun makers, the report states:

This lack of any security or inventory requirement for gun manufacturers and dealers makes it easy for gun sellers to claim falsely that firearms they have sold illegally and “off-the-books,” were lost or stolen. Federal law requires that gun manufacturers and dealers report guns that are lost or stolen, but does not require them to undertake any effort to determine whether guns are missing from their inventory.

Andrew Molchan, Publisher of American Firearms Industry Magazine, told CNN in a statement, “The Brady spin and implication that some manufacturers, whose names are not mentioned so we can’t check the charges, are knowingly selling guns before they are logged into the manufacturer’s records is absolutely ridiculous.” 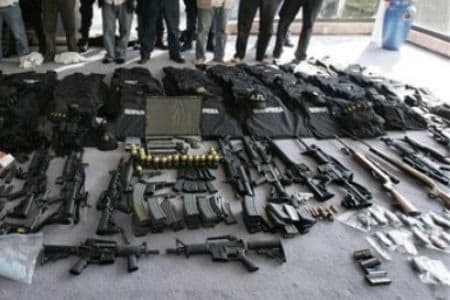 According to the ATF, last year approximately 600 agents conducted more than 10,000 inspections at various gun manufacturers.

There are many questions that emerge following this Brady report, among them: which gun manufacturers are responsible for the missing firearms?  Is it a case of a few bad apples ruining it for the whole bunch?  Or is it a systemic issue that plagues all manufacturers?  Would a change in legislation really address this problem?

Also, by the numbers, ATF statistics show that in 2008 more than 5 million firearms were made in the U.S.  If 5 million is an average number of firearms produced each year, then even if we use the 16,000 missing firearm figure for the past two years, the percentage of firearms recording missing compared to the number produced is something like .33%, is this an “acceptable” percentage?

At the end of the day, if the numbers released by the ATF are accurate, gun manufacturers need to do a better job at securing their inventory.  Yes, mistakes happen, and they will continue to happen, but for an industry that is constantly under the microscope mitigating all mistakes, no matter how impossible that seems, must be a priority.  Yes, it’s unfair, but as long as there are people out there who are determined to repeal the 2nd Amendment and put firearm manufacturers out of business, keeping our house in perfect order is a must.  Besides, it’s one of the best ways to fight back.

For the most part gun owners and gun manufacturers have a sterling reputation, but as we are all keenly aware, it only takes one mistake to ruin or mar a reputation.