So you want to get into competitive shooting, eh?  You’ve decided you want a premium AR rifle but aren’t interested in paying the dollar equivalent of a no-questions-asked private tour of the Hershey’s factory?  You’d like to pay more than bottom dollar, but hey, you know, not too much more.  And you’re sure as shit not going to buy some kind of retreaded AR-15 from Trinidad that was imported to the U.S. back in ’87 and were finally released for auction now that the statute of limitations has passed.

No, you want a good rifle made just for you by an established rifle manufacturer, preferably American we’re guessing, someone like Stag Arms of Connecticut, famed creators of the left-handed AR.  Stag’s been a no-frills supplier of affordable ARs for a few years now, and they’ve got a solid reputation around them built up.

So it shouldn’t be a shocker that after years of making carbine, mid-length, and rifle-length firearms in both M16/M4 style and bull-barreled hunting and varminting rifles that they’re filling out their catalog with some competition-oriented rifles.  Two, to be specific: the Model 3G, for three-gunners, and the 3GL, for three gunners of the sinister sort. 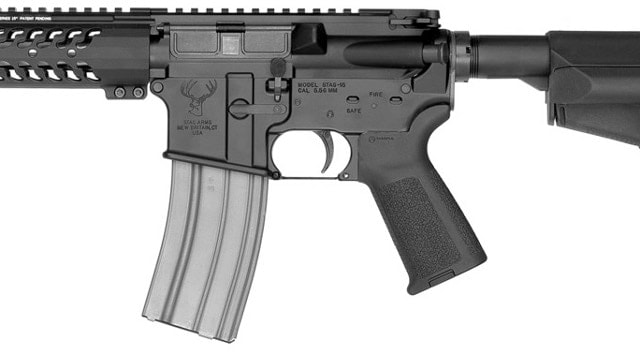 “The Model 3G provides the shooter an excellent rifle to excel at 3-Gun competing. Working with our newly formed 3-Gun shooting team, Team Stag Arms, we have determined the features and configuration that will have the broadest appeal and use in competition. With this rifle, competitors are able to produce fast and accurate shots from close to long range as is needed in 3-Gun competitions. ”

It’s a mid-length 5.56 operator with a mid-length gas system, an 18-inch heavy, fluted barrel, with a middle-of-the-road 1/8 twist, a Geissele Super 3-Gun trigger, a 15-inch Samson Evolution free-floating full-length top-railed forearm, (3, 6, and 9 o’clock rails may be affixed) and a Magpul ACS stock and MOE grip.  Oh, and don’t forget that mondo comp with the standoff.  All in all, it don’t look half bad.

Stag’s Model 3Gs will be available October first, and are the most expensive Stags to-date.  Their MSRP, $1,459.00.  But that means a real-world price of about $1200, maybe less, and to be honest, you probably can’t build a Model 3G for twelve hundred bucks.  And with so many other competition ARs coming in at two grand or more, well damn, this is a fine deal, even if it doesn’t come with sights.  (The angled Dueck Defense Rapid Transition Sights are “optional”.)

There are a lot of semi-premium ARs on the market, but this one stands out.  Straightforward design with the necessities covered, without rocking the boat or rocking your wallet.