Los Angeles Sheriffs Testing Stun Glove, and also How to Make Your Own Stun Glove

“For police and corrections officers, preventing and defusing confrontations can save lives, and that’s the premise behind the BodyGuard. 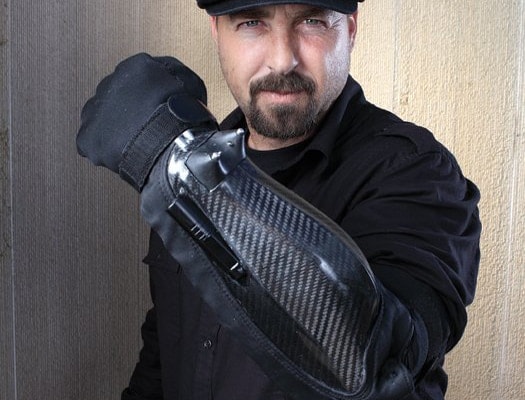 “Equipped with a highvoltage stunner, video camera, laser pointer and flashlight, the armor sleeve is intended to prevent violent situations. The invention was designed by David Brown, a cameraman, editor and producer who makes a living filming musical acts such as Rage Against the Machine and Snoop Dogg, as well as behindthe-scenes movie footage for the actor Kevin Costner, a friend and BodyGuard investor.”

Actually, it doesn’t look all that bad, although using it looks like it could be a little awkward, but who knows, maybe Costner and, who was the guy who was in The Postman, that tanked but wasn’t really that bad eith—oh, right… anyway, maybe with some mass behind it they’ll take off.  They got the tactical color scheme right, plus it’s carbon-fiber (or covered in carbon-fiber vinyl).  Two kinds of black!

The BodyGuard debuted in May at the U.S. Department of Justice’s Mock Prison Riot, an annual training and technology-assessment event held at a decommissioned penitentiary in West Virginia. The first demo unit will be released to the Los Angeles sheriff’s department later this year. Brown says future incarnations could include chemical sensors, an electronic translator to help soldiers communicate overseas, or biometric readers for airport security guards.”

That doesn’t mean you have to know monied actors or work as a police officer in Los Angeles to have all the stun-glove fun.  Gadget hackers extraordinaire over at Hack-a-Day put together video instructions on how to make your own with some cheap and easy-to-find hardware: 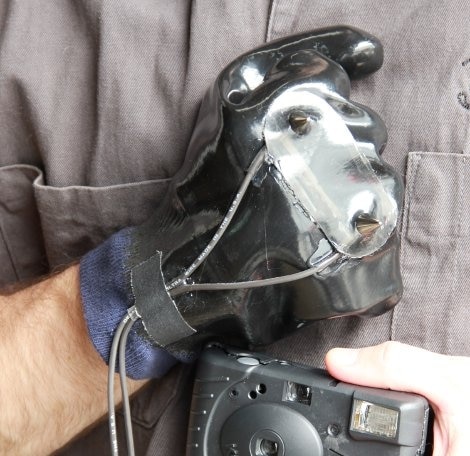 “Hackaday headquarters has recently been overrun by techno-groupies hanging around outside so we decided to take some measures to discourage that. A word of warning though, if last week’s video ruffled your feathers then you probably shouldn’t watch this one. In this video [Jack] shows you how to create a stun glove using a disposable camera and some leather spikes. To prove that it really works, he intentionally takes a jolt from it courtesy of Hackaday’s security chief [Vlad].”

Protip: fill up the camera body with a bunch of extra batteries wired in parallel.  You’re not using that space for the optics and it’ll run forever.

Bet you never thought you’d ever step foot into a Hot Topic, but hey, there you have it.