James Jones, 27, of Collingwood Road, was arrested in Tottenham, for converting starter pistols to handguns.  This is, of course, in the United Kingdom where there’s a market for these things.  As opposed to the U.S., where we only shoot shot shells from flare guns because it’s fun.

Uh, or not, no one at Guns.com has ever weaponized a flare gun nor have any of our contacts, and none of us thinks it’s super-funny to get to the Walmart checkout with nothing but a flare gun, a box of shells, and meat snacks.  Because that would be incredibly stupid and dangerous and recoil like a motherfucker. 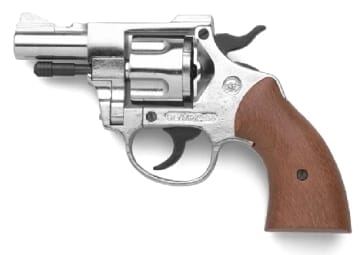 It sounds about as dangerous as converting an Olympic Arms 38 starter pistol, designed to crack off .380 blanks, by cutting open the part that looks like a barrel but in actuality is just a hollow, capped length of pot metal.  Actually, that sounds even riskier because when it explodes, it’s shards of metal, not dayglo orange plastic that shoot out in all directions.

But that’s a risk the criminals of England are willing to take for a firearm.  Which is the business of Mr. Jones: converting the pistols into working firearms with a traveling machine shop (hacksaw) in a suitcase.  He was arrested along with a whole mess of other criminally-minded people operating out of a music shop.  Along with the converted pistols, they found ammo and drugs.  Literally in tons, about half a million pounds’ worth, or $780,000. Along with two other main conspirators, Jones is going to jail for a decade.

Now, to be clear, doing this is illegal.  It’s sorta illegal here, provided you’re a felon or under age or whathaveyou.  Law-abiding citizens may do whatever the hell they want with any combination of their fingers and explosives, it’s our right, damn it.  But in England, not only is converting starter pistols into firearms is illegal, possessing starter pistols that can be converted is illegal.

“Detective Chief Inspector Paul Harwood, who ran the major undercover operation—codenamed Peyzac—said, ‘It is believed that James Jones had converted many more firearms than actually recovered.'”  We are shocked to hear this.  Absolutely flabbergasted.  Completely nonplussed. You mean a major six-figure racket might not be limited to a single bust’s worth of contraband?

The police are already claiming this as a victory.  In a way, it is, right?  We’re not going to deny them that.  But you know they’re not the only game in town.  How can it be possible for every underground armory to be halted?  Big operations are easy to bust, they just take time.  What about the small, tight operations?

As an English experiment, it is time to admit to the futility of gun control?  If not now, when?