Marine Corporal Dakota Meyer was told to say back, out of harms way, out of the kill zone where his fellow Marines were pinned down, taking gunfire from 50 heavily armed Taliban insurgents.

Instead, Meyer along Staff Sgt. Juan Rodriguez-Chavez hopped into a Humvee and headed straight into the kill zone.  Chavez took the wheel and Meyer manned the gun turret.

After multiple trips in and out of the chaos, Meyer and Chavez saved 24 Marines and 12 Afghan soldiers.  Meyer managed to kill at least eight insurgents in the six-hour gunfight that took place just over two years ago, in Sept. 2009 (read official citation below).

“In Sgt. Dakota Meyer, we see the best of a generation that has served with distinction through a decade of war,” Obama said during the ceremony in the East Room of the White House.

The President added, “Dakota, I know you’ve grappled with the grief of that day, that you said your efforts were somehow a failure because your teammates didn’t come home,” despite Meyer’s heroic efforts four Americans died in the ambush, “But as your commander in chief and on behalf of everyone here today and all Americans, I want you to know it’s quite the opposite.” 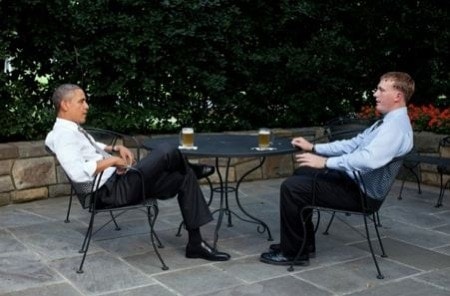 But Meyer’s true character wasn’t only revealed that day back in September.  Upon hearing news that he would receive the CMH, he requested that those who were KIA that day also be honored for their sacrifice.

Will Duke, an organizer of a tribute honoring one of the fallen, said Meyer’s request for the concurrent memorials spoke volumes about his character.

“I can tell by his actions, not only the actions he took in earning the Medal of Honor in Afghanistan but also the actions he is taking now. Essentially by requesting these memorial services for his fallen comrades, he’s saying this is about them,” Duke told reporters. 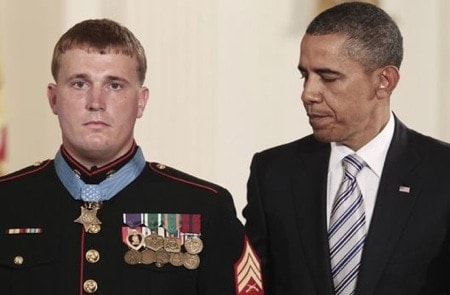 For conspicuous gallantry and intrepidity at the repeated risk of his life above and beyond the call of duty as a member of Marine Embedded Training Team 2-8, Regional Corps Advisory Command 3-7, in Kunar Province, Afghanistan, on 8 September 2009. When the forward element of his combat team began to be hit by intense fire from roughly 50 Taliban insurgents dug-in and concealed on the slopes above Ganjgal village, Corporal Meyer mounted a gun-truck, enlisted a fellow Marine to drive, and raced to attack the ambushers and aid the trapped Marines and Afghan soldiers. During a six hour fire fight, Corporal Meyer single-handedly turned the tide of the battle, saved 36 Marines and soldiers and recovered the bodies of his fallen brothers. Four separate times he fought the kilometer up into the heart of a deadly U-shaped ambush. During the fight he killed at least eight Taliban, personally evacuated 12 friendly wounded, and provided cover for another 24 Marines and soldiers to escape likely death at the hands of a numerically superior and determined foe. On his first foray his lone vehicle drew machine gun, mortar, rocket grenade and small arms fire while he rescued five wounded soldiers. His second attack disrupted the enemy’s ambush and he evacuated four more wounded Marines. Switching to another gun-truck because his was too damaged they again sped in for a third time, and as turret gunner killed several Taliban attackers at point blank range and suppressed enemy fire so 24 Marines and soldiers could break-out. Despite being wounded, he made a fourth attack with three others to search for missing team members. Nearly surrounded and under heavy fire he dismounted the vehicle and searched house to house to recover the bodies of his fallen team members. By his extraordinary heroism, presence of mind amidst chaos and death, and unselfish devotion to his comrades in the face of great danger, Corporal Meyer reflected great credit upon himself and upheld the highest traditions of the Marine Corps and the United States Naval Service.