Coming Out About Guns: Telling People You’re A Gun Enthusiast

True story.  I was in San Francisco, CA, with my girlfriend visiting her sister.  She lives there with her husband in the city about two miles away from AT&T Park.  Beautiful area.  We were walking back to their apartment after a few hours of shopping and day-drinking.  Here’s part of our conversation:

Me: Well, because I believe in the Second Amend…

GF’s Sister:  No one should ever own a gun.  There’s no reason for it.  None…

GF’s Sister: I would never allow a gun in my house.  Never.  They’re dangerous and they
kill people.

GF: Yeah, I agree. Guns are dangerous.  See my sister agrees with me.  You should sell
your guns when we get home.

GF’s Sister: I think you should think about getting a different job.

Okay.  So you get the idea.  My girlfriend and her sister are staunchly pro-gun control.  And in this particular instance, my GF disclosed my hobbies to her sister without warning, on purpose really, knowing that her sister would agree with her and the two would be able to gang up on me.  Prior to this, my GF and I had more than a few contentious discussions, on our own, concerning the issue of guns and gun control in our apartment (we live in LA).

So, after this rather abrupt and awkward discussion between the three of us in San Francisco, I thought about the optimum conditions for telling people who are pro-gun control that I’m a gun enthusiast.   It’s not that you need to share this information with everyone, but amongst friends and family (and perhaps your doctor) there comes a time when sharing your hobbies and interests is appropriate and, in some cases, necessary (word to the wise: tell your GF you are a gun nut before you move in together, not after.  I learned this one the hard way). 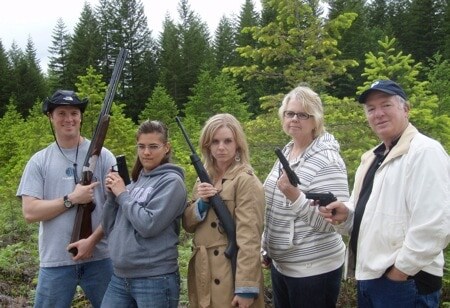 So here are five tips to keep in mind when you are coming out about your passion for guns:

Don’t be ashamed or give the impression that you are ashamed of your hobby.  Out here in Los Angeles, although there are a few local gun ranges and a few local gun stores, by in large, the majority of people are to varying degrees pro-gun control.  The idea that you collect, fire, handle guns on a regular basis is a strange concept to many of them.  Don’t be swayed by the prevailing mindset or attitude toward firearms.  Be proud of the fact that you own a gun.  And be enthusiastic when you discuss your passion.  Being timid or bashful will only reinforce their perception that you are somehow wrong, different, strange, etc.

In truth, some people will just shut you out the minute you say, “I own several guns.”  After that, their minds are made up on who you are and what your like.  But I like to believe that most people are open-minded.  So for the individuals who are open-minded, and who will listen, have an intelligent conversation about firearms.  For example, share your thoughts on gun safety.  From my experience, this is a great way to begin a constructive conversation.  Detailing how you store your firearm (gun safe, trigger lock, etc.) is very appealing to people who are afraid of guns.  Conversations like these will lead them to distinguish between people who have guns and responsible gun owners.

A Day At The Range

Offer to take them to the range.  Many people who have a negative attitude toward guns have never fired one.  If you take them to the range and they become familiar with a weapon as well as range procedures, their hard-line stance begins to soften a bit.  They typically begin to re-think and re-examine their position: “Maybe guns aren’t so bad, so dangerous when in the hands of someone who knows what he/she is doing.” Or, “wow, shooting guns is actually fun.”

Listen to their thoughts, feelings, opinions, etc. on gun-related issues as well.  Don’t just blindly preach the gospel of guns.  Listening shows that you are open-minded as opposed to an ideologue.  And studies show that people are more inclined to listen to what you have to say when you in turn demonstrate a capacity to listen.

Rome wasn’t built in a day.  Don’t expect to change someone’s position on guns in a twenty-minute conversation.  Be patient. But also realize that you may never change their feelings and attitudes towards guns.  And that’s okay too.  As long as there is a mutual level of respect, then everything should be fine.

For me personally, my GF is still pro-gun control, so is her sister.  But they’ve come around to the idea that maybe it’s not as weird or as dangerous of a hobby as they once thought.  My GF has especially reconsidered her position, just the other day she spoke about the possibility of going to the range.  I just said, “Yeah, sure, whenever you’re ready.”