Do You Shoot Low and Left? Let’s Examine Your Grip

If you’re a right-handed shooter and your rounds are grouping on the target low and left, you’re not alone. Hundreds, if not thousands, of right-handed pistol shooters head to the shooting range and afterwards wonder why they majority of their rounds are off center mark of bullseye. Let’s not leave out the southpaws.

Novice left-handed shooters are in the same category, except lefties would shoot a group low and right. Why? I’ll explain. 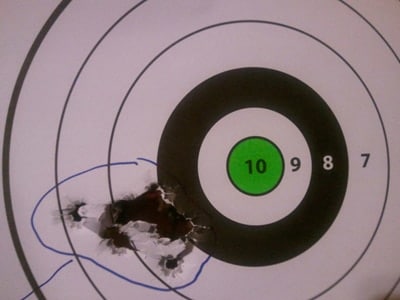 The biggest reason: inexperience. But the good news is inexperience can be overcome and the tips offered up in this article will help tremendously.

Grabbing a pistol, be it for the first time or even the hundredth time, and just shooting it doesn’t make anyone perfect. If you fit into this category and you
feel you’re being labeled an inexperienced or novice shooter, even though you may have been shooting handguns “all your life,” don’t fret or frown.

It’s not like the shooting community is going to make you sew a giant, scarlet “N” for Novice on your range clothes, signifying you’re not a perfect shooter. People won’t mock and point, “Hey, there goes the guy who shoots low and left. Novice. What a loser!” Of course not, and if someone says something rude about it, well they’re just a jerk. Everyone drops a few rounds off center now and again, even the pros.

Okay, you’re buddies might chide you, maybe even make you a tongue n’ cheek tee shirt highlighting your abilities to that effect, maybe talk loudly about your shortcomings within earshot of that hot, gun loving girl you’re trying to snag a date with. Everyone has one of those friends.

But all things considered he’s a good friend because, when teasing comes out of love and respect, it makes for a good incentive to improve. 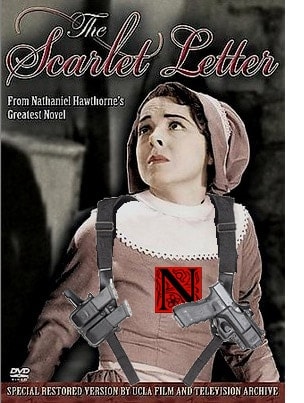 So bad range days are behind you now. You’re dedicated to improving. Here’s the secret:

New shooters have a tendency to convulsively squeeze the entire palm of their shooting hand. When shooting, whether using one hand or two, remember that your three-finger shooting grip must not move. Your trigger finger should operate independently.

You can also try this practice technique clutching a racquetball in your three finger grip.

As any and every shooter must remember, sight alignment is critical, but don’t freeze your sights then slam or slap or jerk on the trigger–that’ll throw your round off every time.

Anticipating the shot or pushing the gun can be a problem too. However, convulsively squeezing the entire palm of the shooting hand is sort of akin to someone who’s never milked a cow before trying to milk one because they think they think they have some idea of how the process works—grip, tug and get milk—when in reality it’s much subtler process than that.

Too often I see people milking their pistol grip—squeezing it with all other might to “control” the gun. That’s not normal. You were born to be a shooter, not a dairy farmer (besides, no one in America even milks cows by hand anymore). 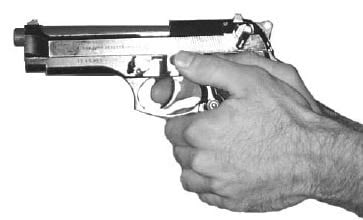 When it comes to other factors affecting your accuracy, there’s a couple of other things to remember. It’s important not to blame the sights, which happens all too often. Secondly, don’t use Kentucky windage to change where you’re hitting—that is to look at your target, see you’re shooting low and left then aim high and right for a hit. Don’t do that! Fix your bad habits first.

Of course, if you’re on a date and trying to impress that girl you finally won a date with—remember, the one you’re buddy tried to submarine you’re chances with—then by all means, blame the sights. Just a warning here though, don’t let her shoot that same gun.

Even though she’s never even shot a handgun before, chances are she’ll out shoot you, then you’ll have nothing to blame but yourself. If that happens, you’ll have to call your buddy and have him order that tee shirt with the big “N” on it. 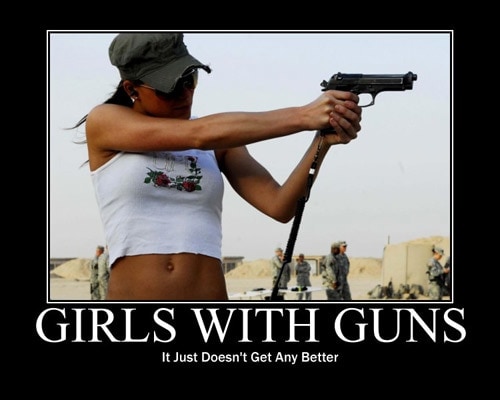 Finally, in order to become a confident tactical shooter, getting all the fundamentals of solid target shooting is imperative. Considering your sights are lined up all the way through the break of the shot, and noting your trigger squeeze is smooth, constant and straight to the rear, reexamine your grip.

Remember to allow your trigger finger to operate alone. Your grip should be tight, but the trigger finger is loose and caresses that trigger. Convulsing the whole palm can really throw off your shot.