Fancy that, a story about how the TSA actually found a gun.  You know, the “we let 20 out of 22 weapons slip by” TSA?

OK, so here’s the deal: JetBlue pilot Robert Paulson (Meat Loaf?) does the tourist thing in New York for the day or so, they he heads back to LaGuardia to catch a free ride home, he plops his man-purse down on the luggage machine and bam, just like that, he gets to sit and wait for the police to arrest him for traveling with his pistol and loaded magazine.

“Paulson had been in New York for at least the day and was taking the flight to go back home to Iowa, the complaint said.  He was reportedly ‘deadheading’—an aviation term for taking a free ride.  Paulson allegedly admitted the gun was his own and ‘forgot’ it was there.  The pilot also allegedly said he had no license to carry the gun in New York State.”

We’re going to go out on a limb here and assume that he isn’t one of those pilots who’s been given permission to pack in-flight heat otherwise there probably wouldn’t be a big ol’ deal, even if LaGuardia is technically in New York and handguns are about as welcome in NYC as smoking and Walmart.  Nope, for all intensive porpoises intents and purposes he’s just a regular person who’s been caught boarding a flight with a handgun. 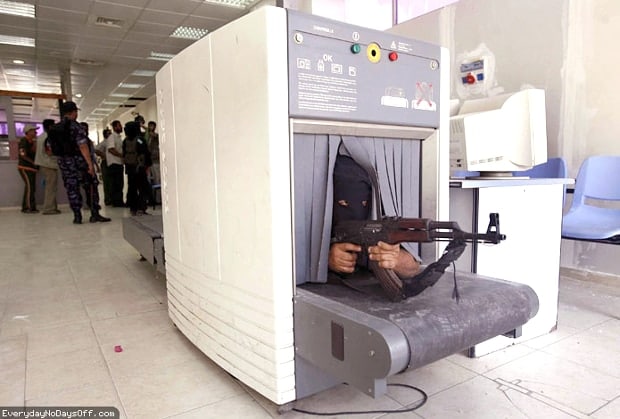 The fact that he’s a JetBlue man only adds to the ever-growing stack of security failures JetBlue has publicly chalked up, like sneaking unscreened packages onto aircraft for the low, low price of $100, or flights getting grounded by pilots who were supposed to be armed admitting that they’d lost their firearms sometime between boarding and the pre-flight rundown.

There is something that could be unusual about this: he had ten rounds on him, which is to say, a NY-friendly number of bullets.  (The H&K P2000SK in .40 S&W has a 9+1 capacity.  All the others hold more.)  Oh right, and honestly, how many times have you forgotten you were armed.  We’re not saying it’s impossible, but what’s more likely, that he’s got his day bag doing double-duty as his range bag, or he though that, you know, he could get away with it?

The only thing here that seems a touch frustrating is just how difficult some places make it to travel with firearms.  New York City aside, flying with firearms is worrisome at best and a fun and interesting way to release a once-captive firearm into the wild.  We wonder if it will ever be possible to fly carrying firearms ever again.

Would you feel safe if, for example, people with concealed-carry permits were allowed to fly armed?  And can and should we get the British Daily Mail to stop running captions like this?