What happens when you directly challenge the United States Marine Corps?

They answer the call.

Toby Jenkins, the executive director of the Dennis R. Neill Equality Center in downtown Tulsa, OK, told the New York Times that there would be no better way to celebrate the termination of “don’t ask, don’t tell” in a conservative state that proudly supports the military than to have military recruiters set up a booth at his pro-gay and lesbian community center.

He told the Times, “If we’ve been fighting for 15 years for the right to be in the military, we said, ‘Let’s just ask military recruiters if they’d be available.’ ”  He added, “But no one was prepared for that question. It was like I was talking to people like they were deer in the headlights.” 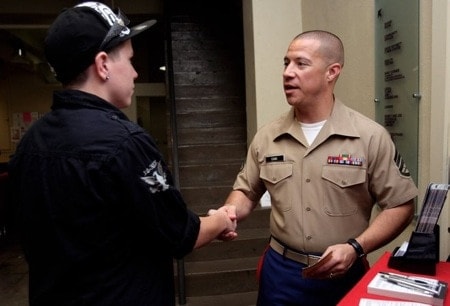 It was an ambush.  Not a mean-spirited one, but one that would test the mettle of our military on a different front: social and media relations.

Jenkins wanted to see if our military would confront the media maelstrom that has surrounded this issue.  And, by all accounts, he picked the most critical time for them to take his test – the exact day on which the DADT repeal took effect, this past Tuesday, Sept. 20th.

Jenkins put the recruitment challenge out to the Army, Navy, Air Force, Coast Guard and Marines.

Only the Marines answered the call.  The Times article states:

The Marines were the service most opposed to ending the “don’t ask, don’t tell” policy, but they were the only one of five invited branches of the military to turn up with their recruiting table and chin-up bar at the center Tuesday morning. Although Marines pride themselves on being the most testosterone-fueled of the services, they also ferociously promote their view of themselves as the best. With the law now changed, the Marines appear determined to prove that they will be better than the Army, Navy, Air Force and Coast Guard in recruiting gay, lesbian and bisexual service members.

Sure, there was some initial trepidation by recruiters and some official legwork had to be done to investigate Jenkins before they agreed to set up shop, but in the end they pulled through. 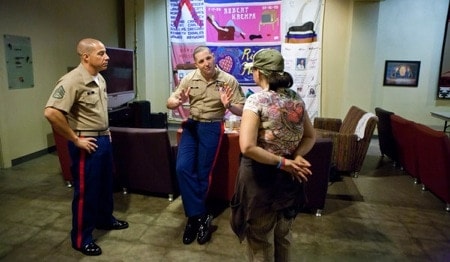 However, the recruitment day was a bust in the sense that only three people came through the center.  This was a consequence of the media turning it into a mini-event (according to reports, there were five local television stations, three print reporters for major newspapers, and at least one NPR correspondent), which likely scared away potential recruits.

But the Marines, being Marines, had a positive outlook on the day citing the increased media exposure as a win for the Corps.

As for questions related to the social implications of the repeal, the recruiters didn’t’ bristle under the bright media spotlight.  When asked about his opinion on the matter, Master Sgt. Anthony Henry told the Times, “My take is, if they can make it through our boot camp, which is the toughest boot camp in the world, then they ought to have the opportunity to wear the uniform.”

DADT was adopted in 1993.  During its run roughly 14,000 military members were discharged after disclosing their sexual orientation.