The Merits of the Zombie Apocalypse

OK, so a lot of people have a lot of opinions about how to deal with the zombie apocalypse, a motif of fiction that in recent years has literally (pun intended or whatever) taken a leap off the page (or screen, or whatever) and stepped into a new life as a classic endgame training scenario and cultural phenomenon, to the point one has to ask, why?

The biggest debate I see is on what weapons are the most effective. Twenty-two Long Rifle versus every other caliber, for example. The argument is that in the case of a “Living Dead”-style outbreak, you must destroy the brain. For this, controllability, not pure ballistics, is a premium. But then there’s effective range, and that’s where .22 loses power.

There’s how much ammo you can store and carry and that winds up being an issue, but of course, small caliber rifles only merit adoption in that particular mechanic of outbreak i.e. slow, dumb bastards you can plug away at from your castle. If you take your “28 Days Later”-scenario and the somewhat controversial fast zombies, you want stopping power above all else. It’s not just about guns, either. The machete versus rock hammer debate is harder to put down than a starving horde. 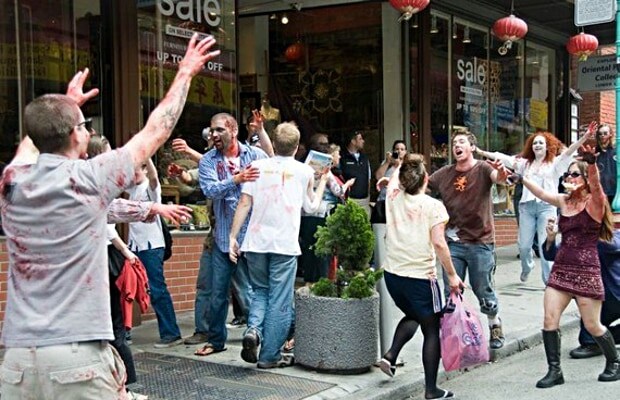 But no matter where you stand with regards to the tools of survival, there is one underlying element that is part of every argument: our collective desire to wargame the zombie apocalypse. The concept of the zombie apocalypse prominently begins with Richard Matheson’s I am Legend, which admittedly was about vampirism but functionally established the themes that every traditional piece of zombie fare would reprise.

And it’s no wonder that Mr. Matheson chose to present them in such a zombified manner, because, zombies, of course, are the best of the monsters. They’re black and white. They were human and now they’re hunger, ourselves stripped of humanity, and that’s most terrifying idea in the world to humans. The idea that you could lose yourself, which is really something you don’t have to be infected to suffer because one of the great themes of zombie fiction is how the survivors survive emotionally. Some rise and some sacrifice, but others who live through the first outbreak fall and become hollow. They’re zombies at heart, eating opportunistically from the other survivors (and underlining the difference between surviving and living). 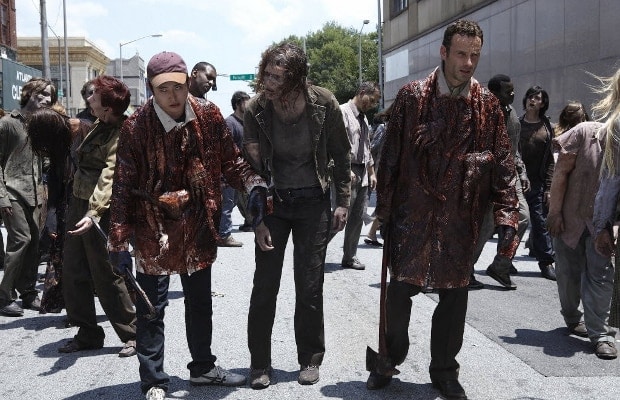 So it’s the themes, not the zombies, that really fascinate us. The horrible demise of the population—in effect, unbreathing, brain-dead Dopplegangers of everyone the survivors knew before the apocalypse—is just brutal and heartbreaking, which, if you’ve got blood in your veins, is damn near guaranteed to speak to you. It’s just not something anyone looks forward to. And it’s that absence of others (but being constantly reminded of them) that brings forward the human traits, enshrined by zombie fiction, while the thought exercise delivers those human traits in their most rarified of examples i.e. the ceaseless work-shopping of Zombie scenarios among friends or forum goers.

Self-reliability, adaptivity, human will triumph in the face of a bleak certainty in your future; these are the things that make the genre so compelling. Ultimately, the value of the individual goes up as their actual ability to contribute to (what’s left of) society is placed under the microscope and more than anything, people want to feel as though they’re contributing. These feelings of collectivism are better than any vacation in the world because we rarely feel them and perhaps a reason people celebrate with zombie walks.

So it’s that, but also there’s the schadenfreude of the system’s collapse, and you can’t ignore this as an allure to Z-day. Everyone who’s ever lived in any type of bureaucracy has experienced the desire to see the walls come down. And they’re held up by so little; so perhaps it’s the thought that this bureaucracy is designed to handle people, and the slightest pressure from something inhuman (and overwhelming, be it a storm or an alien invasion) can knock it all down. 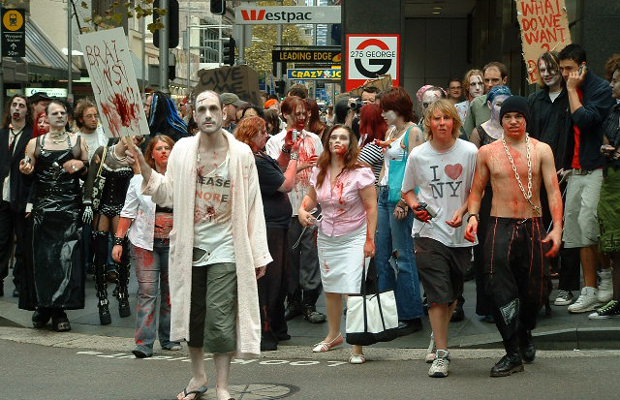 Accordingly, there is a clear appeal to the zombie apocalypse, no matter what form it takes. Here are a few reasons why: