Is Obama Good For the Gun Industry?

In the gun community, President Barack Hussein Obama is a controversial figure.  Many see him as a harbinger for confiscatory gun policies that will ultimately lead to the abolition of the 2nd Amendment.  While others see Obama as a benign figure who has been unfairly labeled as a gun-hating miscreant.

Well, as with most things, the truth probably lies somewhere in the middle.

Obama is not going to take our guns, but at the same time he has been outspoken about certain gun laws that restrict the rights of gun owners. Consider his federal mandate regarding border state reporting for the sale of multiple semi-automatic rifles with detachable magazines that was a knee-jerk reaction to Mexican drug cartel arms trafficking in and around Texas, Arizona, New Mexico, and California.

Ironically, it wasn’t the dealers who were responsible for the flow of firearms into Mexico; rather it was the non-interdiction tactics that were part of the botched ATF sting operation, Operation: Fast & Furious.

But aside from the aforementioned, Obama has been pretty silent on the issue of guns and gun control throughout his first term.

He has, at times, echoed the platitudes of the moderate pro-gun control crowd, i.e. “commonsense gun laws,” etc, but there hasn’t been much of the sweeping gun control reform some of us imagined.  So pinpointing his true intentions with respect to guns and gun control has been a bit of a struggle.  Some of us think we know how he feels about guns and gun control, but the truth is the jury’s still out.

The result of this uncertainty has created a boom in the gun industry.  Since Obama was elected in 2008, guns and ammunition have been flying off the shelves.  An article in Bloomberg News discussed this phenomenon, author Joshua Green wrote:

The government doesn’t track individual sales. But the FBI criminal background check required to purchase a gun is considered a reasonable proxy, and these have hit record numbers each year Obama has been in office. This year, they’re on track to surpass 15 million for the first time.

In addition to the record number of requests for gun licenses, gun manufactures have realized a precipitous growth in revenue.  Take for instance Strum Ruger whose stock price has risen more than 400 percent since Obama was elected.  Gold, on the other hand, has only risen 113 percent (see chart courtesy of Bloomberg; Gun: Tim McCreary/AP Photo; Gold: Corbis). 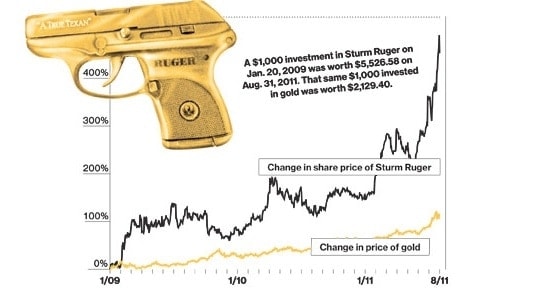 And even in states were the Obama “gun boom” has shown signs of lagging, statistics are still up. Michael George of ABC Action News cited Florida gun metrics in his article.

George wrote, “Despite the decline, store owners say firearms are still far more popular than they were just four or five years ago. Statistics show twice as many Floridians are getting concealed weapons licenses compared with just four years ago (123,759 in ’10-’11, compared to 66,078 in ’06-’07).”

So to answer the question, is Obama good for the gun industry?  By all accounts it appears that way.

“I think half of the people in the firearms industry, if asked, would hope [Obama] is not President, but then will secretly go out and vote for him again,” Fifer told Green in July.

One can’t help but to believe that’s true, at least with respect to gun shop owners and gun manufactures.  People, above all else, tend to vote with their wallets.

Still, many believe that if Obama is elected to a second term it will be the beginning of the end for gun owners (and this country).

Those who feel this way and are compelled to purchase more guns and ammo as a result of their anxiety will play directly into the hands of those who stand to profit from an increase in gun sales and ammunition sales.

In the end they may be right about Obama, he may eventually pass gun reform that further infringes our 2nd Amendment rights.  However, and in the meantime, one should just remind them to buy some stock in arms and ammo manufacturers.