Heckler and Koch's MP5: Made in Germany, but a Citizen of the World

We all have our favorites, that’s just natural, so when I was asked what one of my favorite assault rifles was, I had to answer that it without a doubt was the spunky little MP5. Made by Heckler and Koch, the MP5 now comes in a variety of closely-related models but, just for personal reasons, I like the MP5K.

Heckler and Koch has become one of Europe’s largest and most important firearms manufacturing company since the end of World War II. During the war they produced weapons for the Third Reich, but now their line of semi-automatic and fully automatic rifles are in use by many of the free world’s military forces, with most of them going into those specialized units having to deal with counter-terrorism issues. 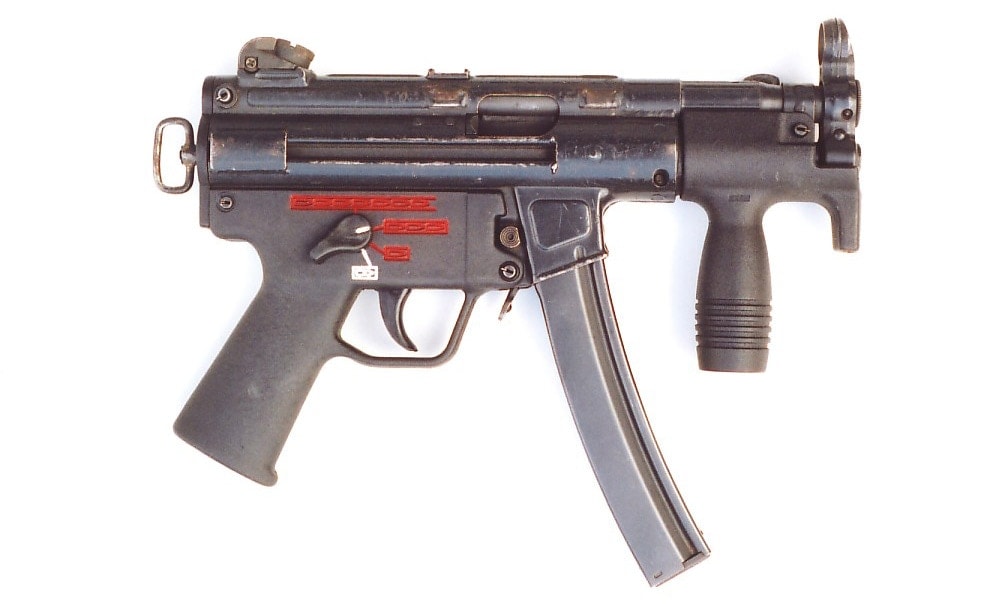 The weapon’s success was based on the popular G3 rifle, which was the standard NATO weapon for many years. Since the 1960s, the G3 formed the basis for the MP5 sub-machine gun. The weapon was designed to fire the standard 9mm Parabellum round. It uses the same roller and inclined ramp locking system as the original G3, yet the MP5 has increased safety features not found on the original rifle.

Unlike other sub-machine pistols or sub-machine assault rifles, the MP5 fires from a closed bolt, where the breech lock is in the forward position when the trigger is pulled through so there is nothing in the internal parts to disturb the aim. It’s a sweet weapon to use, both in the semi-automatic mode and the full automatic mode of some later models.

The MP5 first stepped into the spotlight when it was used by the SAS during the hostage rescue at Iran’s embassy in London in 1980.  It has been used by specialized law enforcement and military units now in more than 50 countries, and it is established as one of the world’s preeminent sub-machine guns. More than 120 model variants are available in order to address the diverse needs and various tactical requirements. Its unique modular design and the variety of buttstock options, sight mounts and various other accessories, all make the weapon highly desirable. 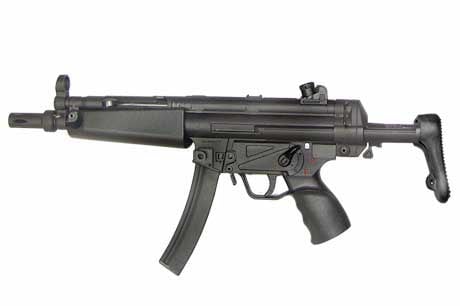 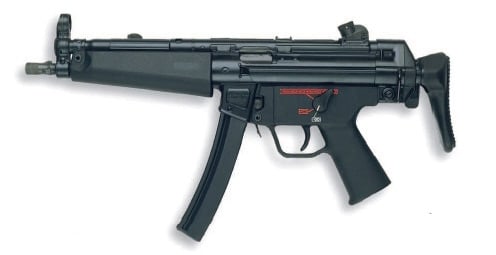 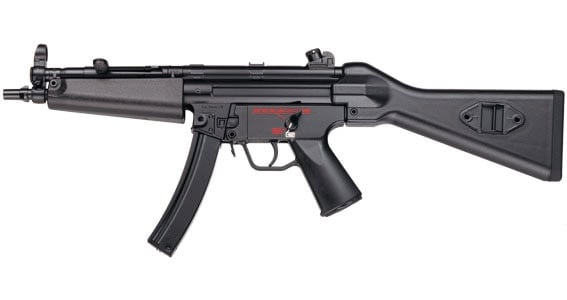 The primary versions of the MP5 are the MP5A2 with its fixed buttstock and the MP5A3 with its sliding metal strut stock. The MP5A4 and A5 models are basically the same as the other models, but have the addition of a three-round fully-automatic burst capability. 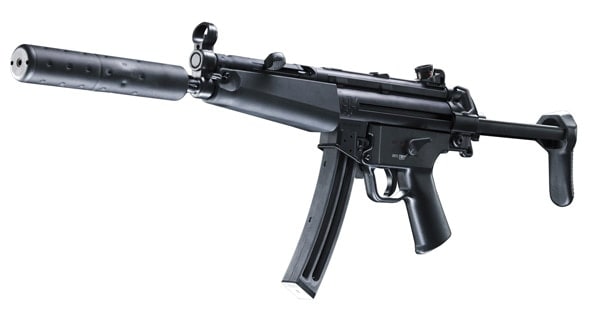 The MP5SD is a suppressed version for counter-terrorist work and, unlike most other silenced weapons, it does not require the use of subsonic ammunition for effective sound suppression. Using an integral wet technology all aluminum or stainless steel suppressor, it conforms to the normal length and profile of the standard MP5.

The MP5Ks take suppressors as well, but they also have a folding stock for ease of use in tight urban environments or for concealability under outer garments. They have also been used by the U.S. Secret Service. At only 12.8 inches in length, they are most easily recognizable by the small fore-grip under the front of the barrel.

The MP5N model was designed exclusively for the navy and have found wide acceptance within our own SEAL Team units. They were produced to be “marinised” for use in saltwater environments and can be fully submerged and still able to be fired.

The German GSG-9 counter terrorism units all carry various models of the MP5. It has a standard muzzle velocity of 1,312 feet per second and a rate of fire at 800 rounds per minute. Most magazines carry between 15 to 30 rounds, but some have been converted to carry 50 rounds. In order to satisfy U.S. law enforcement requirements, Heckler and Koch introduced the MP5 chambered for the 10mm round, followed by other versions chambered for .40 Smith and Wesson and .45 Colt rounds. That MP5SF is a single-fire weapon with semi-automatic only configurations to satisfy Americans without a class three license.