Boots Hinton Talks to Us about His father, Ted Hinton, and the Duo He Caught, Bonnie and Clyde

L.J. “Boots” Hinton, in discussing his father Ted, the man largely responsible for ending the criminal careers of Bonnie Parker and Clyde Barrow, said the Bonnie and Clyde the public knows are different than the real pair.

“The (1967) movie Bonnie and Clyde was about five percent historically accurate,” Hinton said. 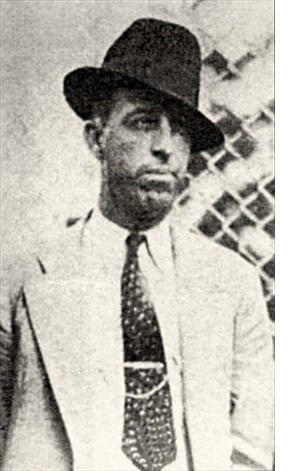 Hinton, 77, answered questions about the case as curator of the Bonnie & Clyde Ambush Museum in Gibsland, a small town of just over 100,000 in the northwest corner of Louisiana.

It was here that Dallas County Deputy Sheriff Ted Hinton, Deputy Sheriff Bob Alcorn, Texas Ranger Frank Hamer and officers Manny Gault and Henderson Jordan laid a trap for the fugitives, who had killed at least 12 people including two police officers.  Hinton’s weapon of choice was a Browning Automatic Rifle, or BAR is it’s popularly known. It was also Clyde’s favorite weapon.

“My dad had two .45 automatic pistols and a Remington shotgun that was sawed-off,” Boots Hinton recalled. “But he went to Smoot and got permission to get a BAR from the (National Guard) Armory.”

Ted Hinton, at the time 29, the youngest of the posse chasing Bonnie and Clyde, was assigned by Dallas County Sheriff Richard A. “Smoot” Schmid to assist Alcorn, Hamer and Gault in tracking the pair. He was a valuable addition, because he personally knew both Clyde and Bonnie.

“My dad helped get Smoot elected Sheriff,” Boots noted. “Smoot was a surrogate father to my dad.”

Boots said Smoot valued his father because as he put it, “you know every sonofabitch in Dallas.”

“Both Ted and Clyde had been Western Union messengers in the early days,” he added.

“This was in Dallas. He also knew Bonnie, who served him as a waitress at a Dallas café. She served him lunches.”

Hinton reportedly later admitted he had a crush on Bonnie, which must have made it hard for him to go after her. 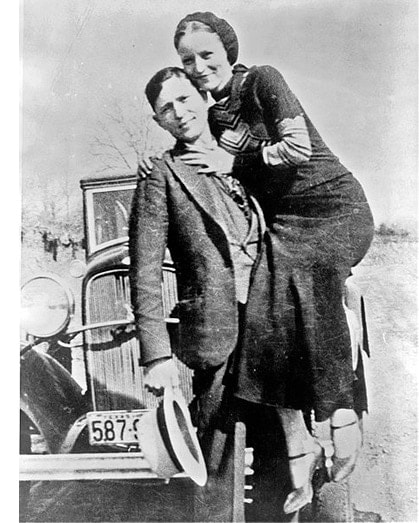 Bonnie and Clyde went on a robbery and killing spree through the Southwest from 1932 to 1934. Clyde’s ability as a fast driver kept the pair one step ahead of the law, never stopping for long in one place, driving hundreds of miles at a stretch. The gang, which included several misfits including Clyde’s brother Buck (killed in 1933), committed heists on a petty scale, usually holding up rural gas stations and convenience stores.  Clyde, a former convict with new blood on his hands, knew he had to keep running until killed.

“Dad and Mr. Alcorn faced Clyde twice,” Boots noted. “One was the failed ambush at Sowers.”

Today, Sowers, Texas, is a ghost town with only a cemetery remaining. However, on Nov. 21, 1933, it was the location where Bonnie and Clyde attempted to meet with their families in a pre-arranged rendezvous to celebrate Clyde’s mother’s birthday (Clyde’s mother and sister were devoted to him). Lawmen got wind of the meeting and opened up on Clyde’s car while concealed in a ditch seventy feet distant just as Clyde stomped the gas pedal. Clyde and Bonnie were both wounded in the knees by door-piercing shots from Alcorn’s BAR, while Hinton and Schmidt’s Thompson submachine guns proved ineffectual.

Bonnie and Clyde abandoned their bullet punctured car, stole another and made their escape. But they should have known the BAR would eventually get them. After the Sowers shootout, Hinton got himself a BAR.

Developed by John M. Browning, the Browning Automatic Rifle was invented for use as a infantry weapon for American forces in World War I. Rugged, dependable and most of all powerful, it fired up to 650 .30-06 Springfield rounds a minute, had a maximum range of 5,000 yards and weighed just under 16 pounds. It was gas-operated and air-cooled.

Though considered a light machine gun, the BAR was noted for its penetrating and stopping power.

At Gibsland on May 23, 1934, Hinton, Alcorn, Hamer and the others emptied 130 rounds into the couple, hitting Clyde 17 times, Bonnie 26. The metal-piercing BAR bullets entered the car, pierced Clyde’s body, then Bonnie’s, exiting the vehicle’s other side. The pair were so riddled embalming fluid couldn’t be pumped into them at the funeral home. 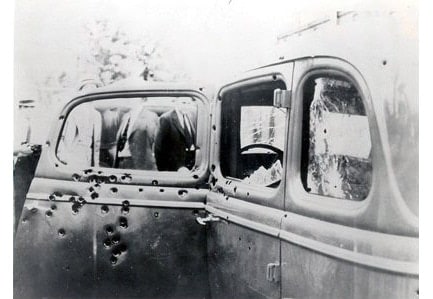 Boots disputes the wrong ideas that Clyde Barrow was a kill-crazy punk or sadist. He was also not the glamorous figure portrayed in the movie.

“Dad defended Clyde on that,” he said. “Clyde did not kill everyone he came up against. But if you got in his way or snapped on him, you were in for it. He knew how to wage war.”

Boots Hinton is retired, but served for years in law enforcement as a city officer in Irving, Texas, a deputy sheriff, and worked with the FBI in customs and narcotics. He said his father was a dedicated public servant who did what he had to do.

“My father was one of those people who were definitely for the law,” he said. “For example, He served on a Grand Jury seven times. One time when he entered a case people said ‘good, now we’re gonna get some action.’” 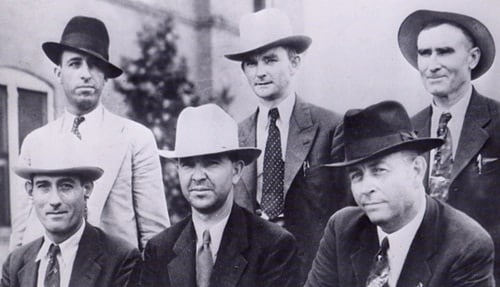