The Belgian Fabrique Nationale d’Armes de Guerre (known as FNH today) was formed in association with John Browning after he left the Colt firearms company way back when.

The first pistol they produced together was the Browning Modele 1900 (Model 1900) chambered for the Browning 7.65mm (0.301) cartridge. It had zero in the way of frills, and was just a basically straightforward semi-automatic pistol.

It was actually the first semi-auto based successfully on the blowback operating system. More than a million of these pistols were manufactured through to 1912 and, even though they were never officially adopted for the military, thousands of them were acquired by military personnel, especially by the officer corps of the Belgian Army who had to supply their own side arms. The pistol was also copied in huge numbers by both Spain and China, and completely without any licensing agreements. The Germans even used the 1900 during World War II and renamed it the Pistole 620(b). It went mainly to their air force, the Luftwaffe. 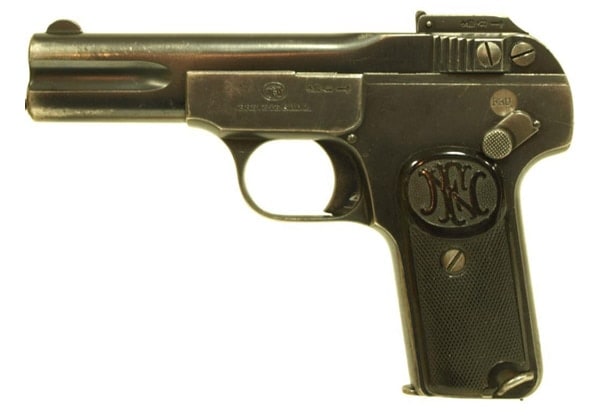 The Model 1903 was the Belgian version designed to use the 9mm Browning Long cartridge, although it was essentially the same as the 1900. The 1903 was used officially by the Belgian army because of the better cartridge, and was produced under license in Sweden, Turkey, the former Serbia, Denmark and the Netherlands, who all adopted the pistol for their own use, as did the Germans again, this time naming it the Pistole 622(b). Some versions of the 1903 could be used with detachable shoulder stocks that had the ability to also be used as the weapon’s holster. It’s incredible what they came up with back then. 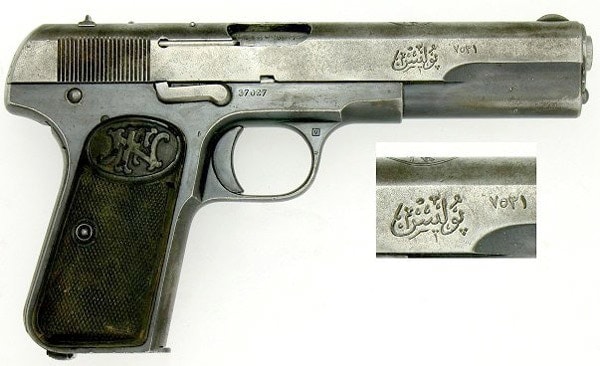 The follow-on model was the 1910, and it was probably the most aesthetically pleasing pistol of the period. It came on the market in the year 1912, before the start of World War I, but was used extensively throughout the war by a number of nations. It was produced to fire either the 7.65mm or 9mm short rounds, the latter being also known as the .380 ACP. The Model 1910 remained in limited production until around the 1980s, and is still considered to be a reliable weapon that is smooth as silk to operate. 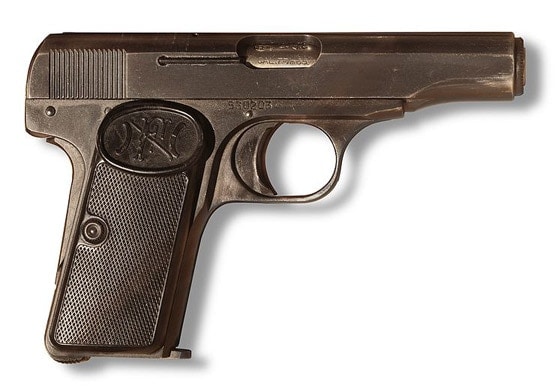 Just to get a gauge of where the differences lie in these three models, here’s a cursory look at the specifications for the three models: 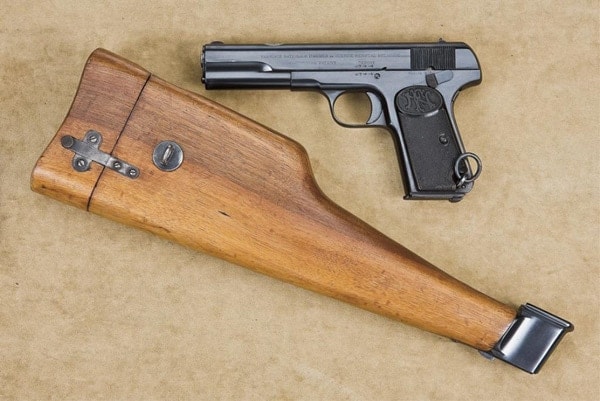 Now, for all you collectors out there, there is a market for some of the original guns in good condition. One or two seem to always be available no matter where you go, but if you somehow managed to come across original models of all three, well, you will have a showcase worth somewhere in the range of $4,000 to $5,000. There’s a guy way up in Alberta with the Royal Canadian Mounted Police, and it took him almost 12 years of searching to finally acquire one of each model. He’s added old photographs and provenance paperwork to the display, some licensing and original Browning/FN brochures, as well as some original rounds, and that complete display would come in at around $17,000.00.

“Mind if we go out and shoot these?” I casually inquired.

If you want to find out what his inappropriate reply was, just send me a message and I’ll let you know.