Is It Time To Free John Hinckley Jr.?

On March 30, 1981, John Hinckley Jr. attempted to assassinate President Ronald Reagan outside of a hotel in Washington, D.C.  As you know Hinckley was unsuccessful.

What was Hinckley’s reasoning for trying to kill President Reagan?

Well, in a letter written to actress Jodie Foster Hinckley explained his impetus for the attempt on Reagan’s life:

Over the past seven months I’ve left you dozens of poems, letters and love messages in the faint hope that you could develop an interest in me. Although we talked on the phone a couple of times I never had the nerve to simply approach you and introduce myself. […] the reason I’m going ahead with this attempt now is because I cannot wait any longer to impress you. 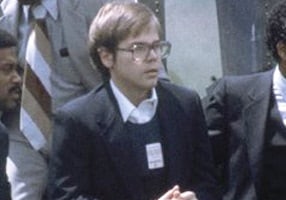 Now, we’ve all had celebrity crushes (mine: Charlize Theron), but I don’t think any of us would have the temerity to scheme up an assassination plot on the President of the United States to impress her (or him).  And when I say “temerity” what I really mean is the bat-shit craziness (a clinical term) it takes to even think along those lines.  In short, Hinckley was unhinged.

The question that now presents itself is: once crazy, always crazy?  That is to say, a few sentences ago I said Hinckley was unhinged, but is he still unhinged?  Or has he convalesced to the point where he is no longer a threat to society?  Moreover, has he paid his debt to society?  Should he be be a free man?

These are the questions that a judge must examine come November as the physicians of St. Elizabeth’s Hospital have submitted a proposal requesting that Hinckley be set free on “convalescent leave.”

For the public to evaluate those same questions it would be prudent for us to consider recidivism rates amongst violent individuals whom, like Hinckley, received verdicts of not guilty by reason of insanity.

Of course, trying to measure recidivism rates isn’t exactly easy.  Here’s why (from a Penn Law Review, published in 2005):

Insanity acquittee recidivism is a problem of grave concern for both the criminal justice system and the mental health profession. Although “[i]nsanity acquittees have been the focus of intense study” since the mid-1970s, (11) researchers have found it difficult to determine precise meta-analysis recidivism rates. (12) One source of difficulty is that the actual definition of recidivism varies significantly from study to study: some researchers define recidivism broadly, including any incidents of rehospitalization based on acts for which the acquittee could have been rearrested; (13) others define it more narrowly, only including rearrests. (14) Furthermore, “[l]ocal and jurisdictional nuances [may] have a dramatic effect on the rate[s] of rearrest,” (15) thereby making it more difficult for researchers to deduce statistical trends from the recidivism data available. 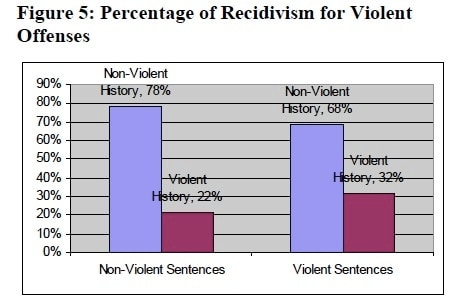 But, there are emerging trends that should help us, more or less, make educated predictions (also from that same review):

Okay, so what is the recidivism rate for the general prison population?  Well, of course, this isn’t exactly easy to measure either, due to the same variances between how researchers define “recidivism,” but for the sake of brevity say it’s 1 out of 5 (a conservative estimate) for violent criminals (see charts from Sentencing Guidelines Commission, State of Washington, 2004).  So, by virtue of the aforementioned transference argument we can then assume that 1 out of 5 violent, criminally insane acquittees will act violently in the future. 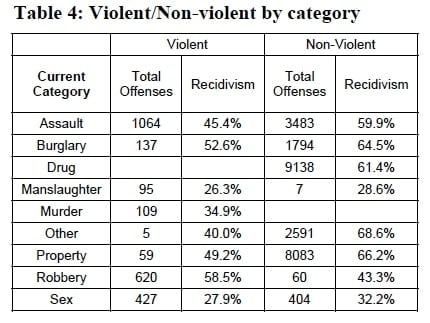 So, to turn back to the Hinckley case, we know that his attempted assassination wasn’t foiled altogether, but did indeed end violently – several individuals, including President Reagan were injured.  We also know that when he was admitted to the psychiatric wards of St. Elizabeth’s Hospital, where he has spent the last three decades, tests found Hinckley to be an “unpredictably dangerous” man.  The point is simply that Hinckley’s history of violence is well documented.

However, Hinckley’s attorney, a man by the name of Barry Wm. Levine contends that he is now well enough to return home.  He told reporters Friday that there is no evidence to suggest that Hinckley is a danger to himself or others, “Not one bit. There is no evidence of him being dangerous, not a little bit, not marginal evidence. None. And they (prosecutors) know it,” he said.

Levine added, “The record is replete with uninterrupted success for over two decades. There hasn’t been a shred of evidence of danger as a result of mental disease. Not a shred.”

In 2009, to aid in Hinckley’s rehabilitation a judge granted him permission to go on a series of 10-day visits to his mother’s home.  Each visit was a success – meaning, without incident.

Now, according to court documents, the St. Elizabeth’s proposal wants to extend those visits to 17 and 24 days and then let the hospital make the ultimate determination as to whether Hinckley should live permanently at his Mother’s home.  There was no specific timetable for this determination (if the judge sanctioned the proposal, St. Elizabeth could theoretically send him home that same day). 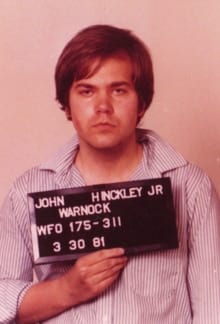 The prosecution called the proposal “premature and ill-conceived.”

Well, there are certainly other factors involved here, but based on the evidence and the expert opinion(s) of his handlers, Hinckley is ready to rejoin society…

After all, statistically speaking there’s only a 20% percent chance he’ll end up like John McGee or Ronald Manlen.

Both Mr. McGee and Mr. Manlen were committed to Michigan mental hospitals after receiving not guilty verdicts by reason of insanity.  After spending some time in the wards, they were both declared “no longer mentally ill and dangerous.”  Shortly after being released, McGee kicked his wife to death and Manlen raped two women.