This past June, Ohio Gov. John Kasich signed into law a bill that allows individuals with concealed-carry permits to carry their sidearm into bars and other establishments that serve alcohol provided that they do not consume alcohol.  On Friday, the law took effect.

As expected, this law was greeted with mixed emotions.

“I really applaud Gov. Kasich and those who laid the plans to make this a law,” Michael Shafer, an NRA-certified instructor with handgun training through the United States Army, Ohio Peace Officer Training Academy and the National Rifle Association, told the Marietta Times. “Any person who goes through the course (necessary to receive a concealed-carry permit) is going to be the most law abiding citizen you will ever come across. This law allows citizens to protect themselves if need be.”

For those who take issue with the new law, Shafer pointed to Ohio’s concealed carry permit process, which does a good job of vetting applicants.

“They must go through an outstanding program that the state of Ohio has and then a background check through the sheriff’s office,” Shafer said.

To make his argument crystal clear, Shafer also spoke about recent incidents in Columbus, OH, where criminals targeted bars and restaurants because they knew no law-abiding concealed-carry permit holder would be present.  With this new law in place, criminals will have to be, at the very least, more discerning about whether robbing a bar is as risk-free as it once was. 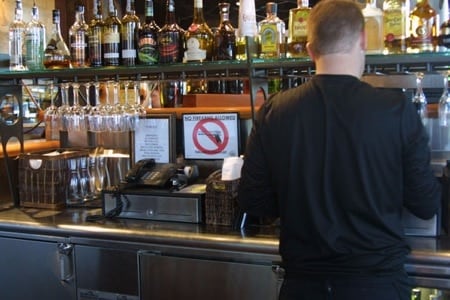 But of course there are people who lack Shafer’s confidence with the “guns in bars” law.  Many point to the old adage that “guns and alcohol don’t mix.”

Kevin Whitby, owner of the Harmar Tavern and Spagna’s in Marietta, told the Marietta Times that he wish he would have had some input.

“Nobody asked me,” Whitby said, “I think those who made the law should have talked to liquor license owners. But it’s going to be hard to get laws like this changed. No one wants to go against the NRA.”

Whitby also said the law creates a dilemma for liquor license owners as now they have to try and be mindful of who is carrying and who is not.

“If it’s concealed, how do I know they have (a gun)? I shouldn’t have to police it,” Whitby said. “Alcohol and guns do not mix.”

Washington County Sheriff Larry Mincks echoed that same refrain, “alcohol and guns do not mix” and explained that this line of reasoning was the main objection amongst statewide law enforcement agencies.  However, he didn’t anticipate that his county would have any issues observing the new law.

“In Washington County, we don’t have problems with people who have CCW permits and we don’t anticipate any problems. But (establishment owners) still have the option to post that weapons are not permitted,” Mincks told the Marietta Times, adding that he believes that would be enough of a deterrent for permit holders not to enter the establishment.

“A person who is carrying should not be drinking at all and (with this law) they are not to be drinking in the establishment. Owners do have the right, if they suspect someone is carrying, to refuse them service,” he said. 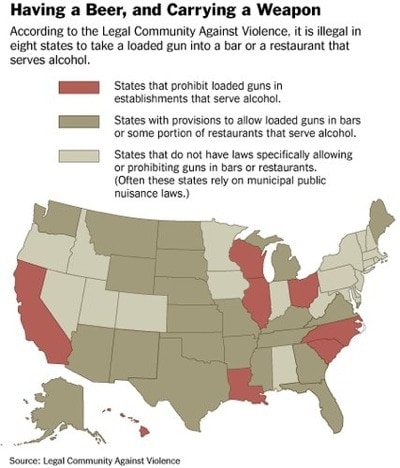 With respect to the “guns in bars” law, not only in Ohio, but in all the states that have passed such laws (and there’s quite a few, see above chart with the misleading title “having a beer, and carrying a weapon”), it’s clear that as long as people play by the rules, follow the law, guns and alcohol are not being mixed.  No one is going out drinking and shooting.  Instead, responsible citizens are simply exercising their right to carry in places where others may be imbibing.

Personally, I don’t see a problem with this, do you?