A North Carolina sheriff’s department has been testing out their newest bullet-catching device, a steel tube full of Kevlar fibers.  Ballistics tubes are starting to replace the use of water tanks to test-fire guns into because really, they splash way more than they show on TV and all it takes is one lazy technician for someone to slip or something else bad.

Plus, the tubes are smaller and don’t distort the bullets nearly as much from the compression, and it can handle high-velocity stuff that water just destroys like rifle ammo, etc.  All that really takes a back seat to having a lab that doesn’t smell like a dorm shower from nasty old water loaded with gunshit. 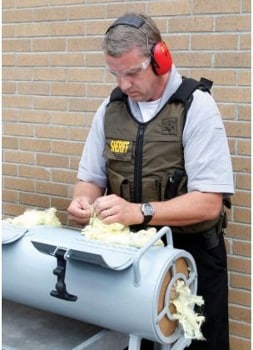 “With the use of a new forensics tool, the Onslow County Sheriff’s Office has begun to track every firearm that passes through deputy hands.”  FYI, that would be every gun they use plus the guns submitted for criminal testing.  Onslow is one of 13 North Carolina counties to participate in the ATF-led national ballistics program, which is an opt-in ballistics fingerprint database that stores case and bullet data.

And while yes, this is art-of-the-state technology and all that, it doesn’t change one fundamental fingerprinting shortfall: unlike actual fingerprints which maintain themselves whether you eat a balanced diet that includes above-average proportions of kale, citrus, and lentils, or just a steady diet of extra-spicy Slim Jims and gas-station Frito Pie, firearm fingerprints change every time the gun is shot.  Or cleaned.  Or dry-fired if you use snap caps.

Sure, it’s just a little, but identifying two bullets as fired from the same gun 100 rounds apart is hard no matter how great your imaging system is, and that’s assuming they’re the same brand and model cartridge to begin with.  Still, we’re not knocking ballistics fingerprinting (mandatory ballistics registers aside) because it is sometimes useful and does sometimes fight crime.

What we’re actually going to pick a nit on is how the Onslow sheriff’s department managed to acquire their thready tube.  “The tube, which cost $3,000, was paid for by monies from concealed handgun permit fees, Sheriff Ed Brown said.” 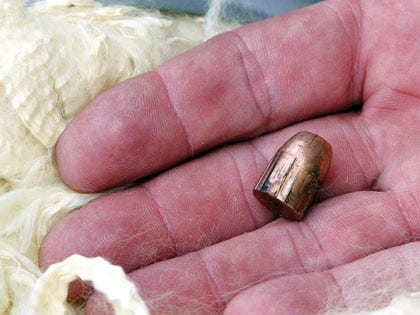 This doesn’t imply, this doesn’t hint at, this clearly states that the North Carolina municipalities are profiting off the concealed-carry permit system.  They are literally charging people for the use of their rights.  Provided that is, if you believe carrying is a right, and not a privilege.  We’re not sure why anyone would come to that conclusion, but our experience proves otherwise.

Do you think that states should make extra money on the side handing out carry permits?  If they don’t intend to profit, but wind up with extra, is spending it fighting crime reasonable, or should that cash find a different home?