If you’re shopping for a combat-class combination weapon laser and light, two names are going to rise to the top of a fairly long list, most of which aren’t really that rugged.  Those two are Surefire X400 and Viridian X5L (warning: autoplay video and annoying sound effect after that jump).  Both are going to set you back a tidy sum, and both have some advantages over the other.  Choosing between the two isn’t our decision to make, and we’re pretty alright with that; it’s hard to go wrong either way.

Make no mistake, these two combos are at the top of the game.  There are less expensive but quality combos out there; for now, we’re just looking at these two.

The Viridian X5L Gen2 isn’t the smallest laser/light combo, it’s not the brightest, lightest, or most power-efficient.  It has just  recently been updated, though, and is one of the most modern laser/lights on the market.  The first generation of X5L was one of the first green laser/light combos, and by electronic standards, now it’s old. 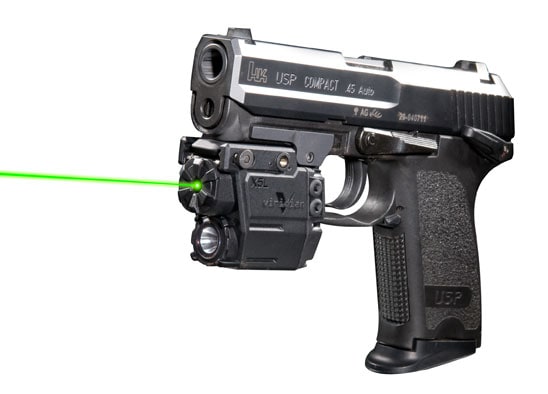 Using a lot of the tech that went into making the C5L combo for sub-compact pistols, the new Gen2 fixes the main problem with the Gen1 combo, and that is the thing’s enormity.  It will clear the bottom of any gun’s trigger guard.  It looks like a rudder on service-size handguns.  The Gen2 combo seriously compressed the unit and sticks the laser up closer to it’s Picatinny mount (and cantelevers it out a little bit).

It’s still smaller and lighter than the Surefire X400.  The X400 is hefty, at 3.3 ounces (X5L, 2.3oz) but man can it take a beating.  There are reports of X400s getting shot and still managing to return fire and carry their buddies to cover.  It’s water-resistant to 66 feet, (X5L a mere 22) which is you getting the bends territory, and it has a Pyrex glass lens that’s unbelievably durable. 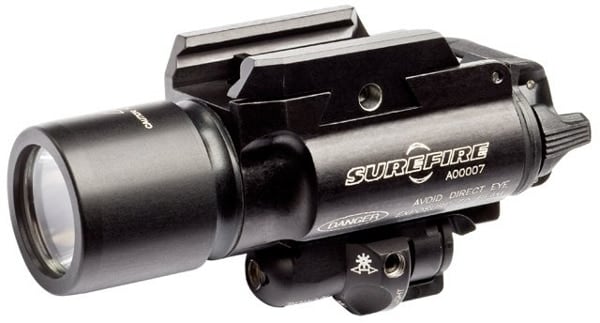 It’s also bigger and the laser protrudes a bit out the bottom.  Also unlike the X5L, Surefire uses red, not green lasers.  They’re bright by most gun laser standards, but not nearly as dazzling as the Viridian green lasers.

Despite the X400’s dimmer laser, or perhaps to make up for it, the Surefire combo has a considerably brighter light; 170 lumens v. 156.  The Viridian has an ace up its sleeve there, though.  The light can strobe at 187 lumens.  Still, because the Surefire’s laser’s red, the X400 has almost triple the battery life; 2.4 hours v. 1.  Both use two 123A lithium batteries. 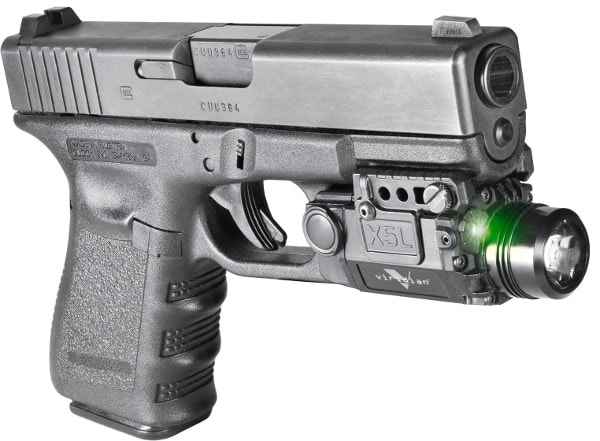 The Surefire’s a lot more common.  Because it’s older, more established, and the X5L Gen2 just came out, it’s easier to put your hands on a Surefire.  Because of their rarity, the X5Ls are selling for more than you’d expect, close to $400.  They’re still cheaper than the X400s, which cost maybe $50 more.

Part of Surefire’s price buys you an awesome warranty.  Aside from not replacing bulbs and batteries, they’ll pretty much fix any of their products, no questions asked, forever.  Viridian only offers a 12-month warranty.

All in all, picking one over the other depends on your needs.  For ease of use and features, we’d have to recommend the Viridian, especially for nightstand duty.  For sheer durability, we want our operators using Surefires.  But hey, like we said, you really can’t go wrong either way.