The likelihood of “players” moving or even running during a firefight is pretty high—it’s not like someone will stand still and let you shoot at them, right? If you’re in war or an urban combat, or facing zombies or aliens, the chances are quite high that your adversary will be moving. Therefore, you need to get prepared, train on how to shoot a moving target and, well, fill up your tactical toolbox.

So what are the techniques for shooting moving targets? 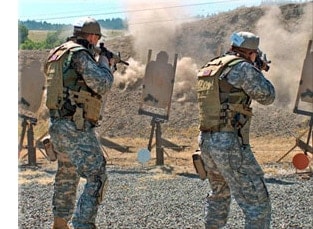 While shooting moving targets with a pistol is very likely, these techniques are more specific to rifles. Why is that? Because pistol engagements are pretty close in range proximity and distance is a big factor to consider when shooting at a moving target or threat. At close distance, the concept involved in hitting the threat remains essentially the same as if the person were standing still: put your sights on target and pull the trigger smoothly, straight to the rear.  Rifle engagements at longer distances are a little more complicated.

In addition to all the other factors that play into a quality shot, including marksmanship fundamentals, gun type, ammo type and down-right aggressiveness, you also must consider the speed of the target/threat, as well as the angle of movement.

There are mainly three techniques utilized in shooting moving targets: leading, trapping (a.k.a. ambushing), and tracking. Sometimes combinations of these techniques are used.

The shooter should be aiming for center mass of the target. Ideally, a center hit, or especially a hit to the head or the heart will neutralize the threat. Beware of aiming for a head shot, however. A head shot to a moving target will be like the time I watched my uncle hit a mule dear on the sprint: pure luck, especially, since he had just missed the deer moments before not 40 yards from him. Standing broadside.

Anyway, enough about shooting animals… Let’s get back to the most dangerous game: hunting humans.

I once heard a former Delta Force operator tell a group of students, “There’s a huge difference between shooting paper and shooting people.”

I’ve always been just a bit uncomfortable with the human silhouette targets. Why? Because they don’t accurately reflect every body shape and size. In actuality, standard human shaped targets are pretty large. There’s a good chance some threatening individual will not be facing you, puffing out his chest, creating a larger-than-life-size target. More likely, an enemy will have only the side of his body showing, while he’s running for cover, or shooting on the move—shooting at you! 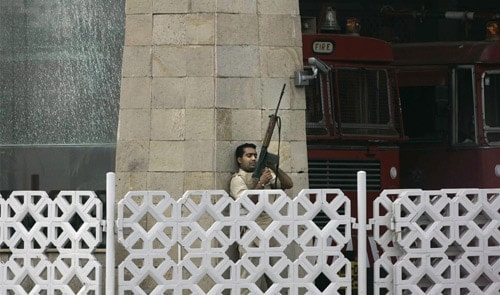 In sum, shooting a moving target requires practice. But even more than practice, winning a firefight against a real-world threat is the most important. Whether leading, trapping/ambushing, or tracking, you need to be quick with target acquisition and quick on the target. Finally, it’s vitally important to remember these powerful words attributed to Wyatt Earp: “Speed is fine, but accuracy is final.”

Until next time, sharpen your tools, hone your skills and keep adding to your tactical toolbox.