SIG Has Finally Made a Stock AR-15 Carbine, the M400 (CORRECTION)

It’s keeping with tradition though.  Sig is expanding on yet another line of guns while their existing products hit the market a little under-evaluated (you know, really letting customers do the product testing themselves under “real-world” conditions, like this year’s, and admittedly highly- anticipated, SIG 556R).

We thought it was really, really unlikely that SIG was making these rifles.   Like just about every single AR company out there, we assumed SIG’s ARs were contracted out, and even speculated on the outfits they’d fit for the task.  But it turns out these are not: the SIG M400 is being built in their Exeter, New Hampshire facility.  Sorry for doubting you SIG.

And they have a product that’s going to settle right in with the other bone-stock, direct-impingement lower-priced ARs, as it’s selling for between $8-900. Maybe they’ll secure some PD or other LEO contracts. Who knows, the future is full of potential.

But honestly, their timing could not be worse. Just a little while ago, Bushmaster re-opened their doors (now they’re Windham Weaponry) and while there are a lot of SIG fans in the cop world, there are way more Bushmaster fans.

And the thing about that is, like, it’s not a surprise that Bushmaster was coming back. They’ve been saying it would be so for months. 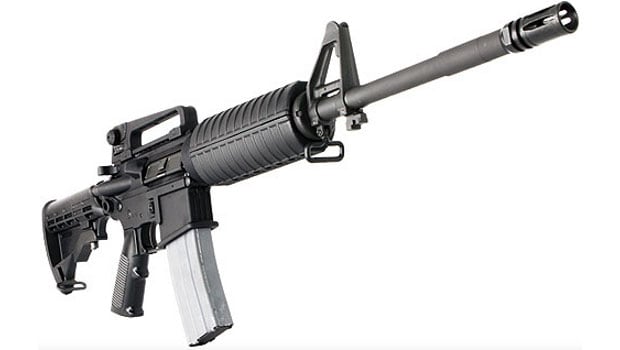 SIG is going to sell a few, more than a few, probably, on their name alone. But they ought to differentiate their product, and teasing people with a Magpul palette-swap model isn’t really the ticket. If SIG really wants to take a bite out of the AR market with something like this, they should drop the price through the floor, or do something else to make them stand out.

All that being said, do you think your next AR could be a SIG? Aside from dropping the price, what would you change about the M400 to make it a little more… distinguished?