There’s just something about old guns that seems to get under your skin. Like the folks who are addicted to yard sales or antique stores, walking into a different gun shop from time to time can be an eye-opening experience, you never know what you’ll find. By way of an example, there was a gun shop in ‘Downeast’ Maine that I frequented a few years ago, and every once in awhile something interesting would show up under their glass countertop. Unlike some other gun shops, the owner of this one would oftentimes have items for sale you would never expect. It was a Saturday morning in mid-February and, winter weekends being what they were in Maine, there wasn’t a whole lot of anything else to do except to constantly be shoveling the white stuff. Anyway, that one morning I trudged in from the cold and spotted a handgun under that glass. It was something I had heard about, but had never seen in person. The firearm in question was an ancient Lebel Model 1874 revolver. 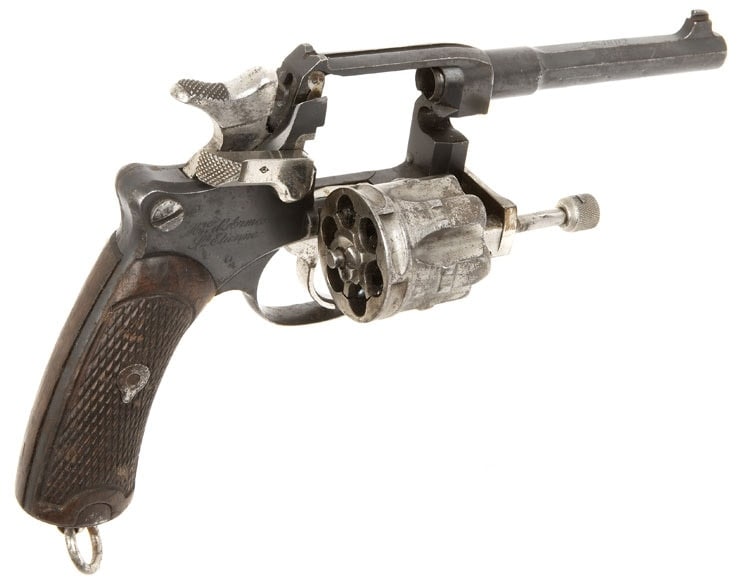 Lebel handguns were the first European revolvers to sport swing-out cylinders for fast reloading. The problem with them, however, was that they swung out to the right, definitely the wrong side (the designers must have been putting something else in their café au lait cups besides the coffee and crème). Anyway, the history of the Lebel line of revolvers goes something like this: they were the very first French military revolvers having come out initially with the 1873 and 1874 Model, just like the one I was holding in my frostbitten hands. When they were first produced they fired 11mm cartridges with black powder, but after 1890 some were converted to fire 8mm rounds. The only real difference between the 1873 and the 1874 was that the 1874 had cylinder flutes. The 1873 did not.

Both models were used extensively by the French during World War I and some even made it into the battlefields of World War II. They did have a more modern replacement that came along a little later. It was the Model 1892, known to the French as the Revolveur Modele 1892 or Modele d’Ordnance. To most everyone who used the little revolver it was simply called the Lebel. 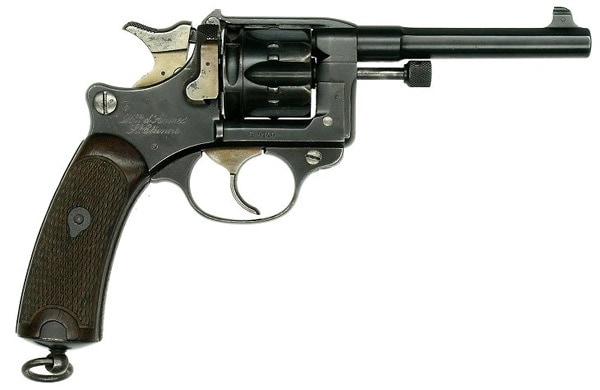 The revolver used a double-action trigger mechanism, which was heavy and robust, and the 8mm cartridge was okay for some incredibly limited array of short-range work. Beyond that, however, it was somewhat inaccurate and not all that reliable. That cartridge was seriously underpowered and even at close ranges would only rarely knock down an enemy opponent. I can’t even imagine how disconcerting that must have been to the French guys on the front lines. I don’t know, I was once told that a BB could kill an elephant if it hit the right spot, but to be forced into relying on a revolver when you’re pretty certain its bullet may just bounce off your enemy’s heavy tunic would scare the bejesus out of me. 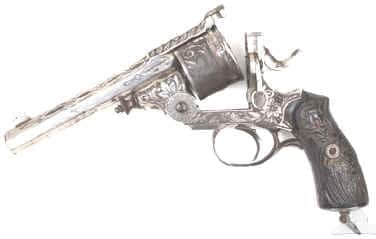 The one truly ingenious thing about that hand gun, however, was that in order to clean or repair it in the field, there was a plate in the lower left-hand side of the frame that could be quickly hinged open in a forward direction. That would expose the cylinder and trigger mechanisms, hence making them very easy to clean. No matter how lousy that old 8mm round proved to be in the knocking-down department, the troops actually formed a genuine fondness for the gun because of its sturdy reliability at short ranges. It was eventually copied in Belgium and Spain, but the models they produced had very limited life spans and were never as popular with their military folks as with the French. The only notable thing that revolver was ever known for was the execution of a German prisoner of war in World War I. The German had apparently fatally attacked one of the French guards with a knife, so he was put to death on the spot, the Lebel delivering the coup de grace.

The revolver carries six 8mm rounds and has a muzzle velocity of 738 feet per second. It weighs 1.75 pounds and has a barrel length of 4.6 inches. Unfortunately, I didn’t buy the gun that cold Saturday morning, telling the gun shop owner that I’d have to think about it for awhile. It was being sold for $75.00, but he would have taken less for it. That was a mistake on my part, because when I returned the following weekend to buy it, it was gone, having been sold to a guy a whole lot smarter than me. If you can find one for sale here in the States I think they sell for around $300.00 now, something like that.