If you’re any sort of a habitual reader of Guns.com, you’re more than likely familiar with the fact that we’ve covered Iowa’s historic and inaugural dove season with some regularity.  As it stands, with recent frost in northwest Iowa, many of the mourning doves are headed south early, so, even though the season is open until November 9, most hunters will now turn their focus on waterfowl and pheasants. 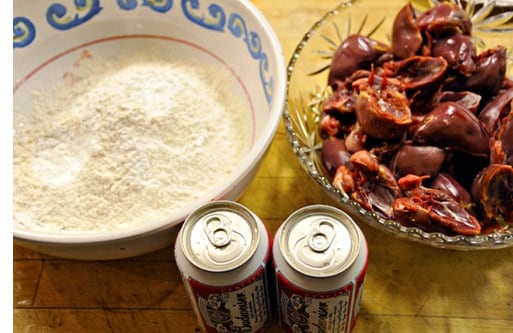 To speak briefly to the success of the first season in the Hawkeye state, all went well, according to DNR officials with whom I visited personally. Although they didn’t have time to get all of their food plots in early enough because of the late passage of the dove hunting bill, hunter numbers and doves bagged were both good. I especially heard of some great shoots from hunters that found recently combined small grain fields. There are only a few of those in this area, so advanced scouting was the key to their success.

So that was that—but not everything.  Because the one concern I hear so often from people when it comes to taking doves, and which Guns.com couldn’t help but notice has become a theme in the responses to articles they’ve run on this topic, is this: “Dove tastes terrible! Why would you ever try to eat them?  There’s nothing on them!” It’s a slight variation on the running joke that I hear from people about eating duck—and it’s almost always from people that don’t know, either out of lack of experience or laziness, how to cook them properly.

To those who are unacquainted with to the epicurean pleasure that is feasting on tweety birds, doves are basically what snobs refer to as squab, just a niced up word for pigeon and one that doesn’t carry the whole streets of New York, movie theater floor popcorn connotation. 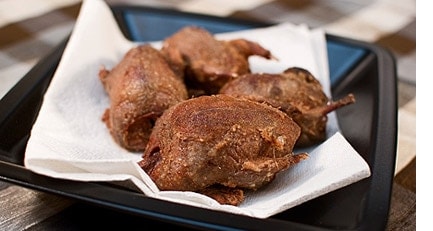 A fixture of aristocratic dinner tables since the Romans ran things, squab/dove/pigeon has been held, almost the world over, as an exotic delicacy, noted for its darker, richer flavor, “silky” texture and lingering berry notes.  In form, texture and taste, there is little to no discernible difference between doves and domestic pigeons, only that wild game always brings a little more flavor to the party and you aren’t going to pay out the nose on specialty shop prices for the birdies you bagged during the dove season.

The bottom line though is that it’s all in the preparation. It’s no different than preparing any other type of food. Fix it right, and it is a delight; fix it wrong, and it’s a disaster.   What turns many off is the sweat equity that goes into preparing the tiny morsels (and probably why it was considered for so long to be a meal for the uber-wealthy) but these fears are supremely overblown and you’ve got to remember you owe it to an animal you had so much fun blasting to use their bounty (regardless of size).  Once you find your rhythm, the feathers will just come flying off the breasts.

First off, take care of the bagged birds while you are in the field. It’s warm this time of year, so don’t let the birds lay in the sun. Keep them cool. This is monumental to the quality of the final product.  Always keep them cool. If you are going to be out several hours, bring a cooler and put them on ice.

Next, when you get them home, cleaning means taking the breasts. Make sure that all pellets have been removed. Then wash them really good with cool water, put them in clean water and leave in the refrigerator over night.

So the birds took a bath all night, you’ve got them pulled out and patted dry with a generous helping of paper towels.  Here’s a couple of ways to cook them.

Are you ready for the shocker? We fry the dove just as one would a chicken. That’s right, we use olive oil and a spoonful of refrigerated bacon grease. We dredge the cut-up portions of dove in flour, salt and pepper and fry it at 350 degrees until brown on both sides. Next, we place all of the breasts in one pan and put a can or two (depending on the amount of doves) of Cream of Mushroom soup over the breasts and cook them again either in the skillet or the oven at 300-350 degrees for another hour. The length of time is determined by how long it takes for the meat to get tender.

Then, serve with whatever side dishes you want. I suggest matching the dove with fresh squash, a cucumber salad and tomatoes.

Doves are great as an hors d’oeuvre. Again, take the breasts, but this time either keep them whole or cut in two – your choice. Marinate them in Italian dressing (store bought or homemade) for 24 hours. When ready for the grill, drain off the dressing, and wrap a strip of bacon around the breast using a toothpick to secure the bacon. Place on the grill and cook until bacon is cooked. This makes an awesome hors d’oeuvre, but what I find is that most of them get eaten as soon as they are taken off the grill. If you want to make this more of a meal, put the doves/bacon on skewers with slices of green, orange and red peppers and onion. 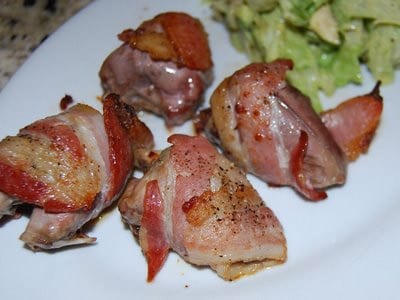 If you want to add a little zing to the meal, make some Jalapeno poppers filled with cream cheese, mozzarella, and browned sausage and crumbled blue cheese. For good measure, throw in some freshly made salsa (fresh garden produce) and chips. Between the dove breasts, the poppers and the salsa – wow, what a mixture of tastes!

Here is another dove entrée. Place the dove breasts in flour and then using a heavy iron skillet, brown the breasts on both sides. You can either use olive oil or bacon drippings. Next, take a ½ cup of dry red wine, ½ cup of olive oil, 2 tablespoons of Worcestershire sauce and a ½ teaspoon of salt and ¼ teaspoon of pepper. Mix this together and add to the doves. Cover the skillet and simmer until the meat is tender. This will take around an hour and a half. Make sure not to let the ingredients boil. It’s then up to you: serve over brown, wild or white rice. Again, I will choose some homegrown vegetables with the meal, such as green beans, tomatoes and cucumbers.

These are only three of the many recipes available. What I think you will find is that prepared with care, you will find the taste of dove to your liking. Plus, I really believe that it puts the final touch on a great hunt!