US Forces Shut Down Iraq Radio Station as Troops Withdraw

AFN-Iraq (American Forces Network Radio-Iraq), nicknamed ‘Freedom Radio,’ has kept American troops company since 2003.  It has been the go-to source for news, information and, of course, music for the servicemen and servicewomen stationed in Iraq.  But with the troop withdrawal deadline date drawing near, the Baghdad-based radio station played its last tune this past Friday at the stroke of midnight (take a guess what song they played).

“It’s definitely sad, but it’s also exciting because it’s time: the American people and the American troops have come here and sacrificed so much. We wondered when this day would come up and now it’s close, so we couldn’t be more excited” Sergeant Jay Townsend, one of AFN-Iraq’s DJs, told an AFP reporter.

The closing of the radio station as well as the closing of other AFN media outlets (which includes U.S. Army television stations) comes as part of a series of preparations for the December 31, 2011, deadline for troop withdrawal.  Currently, there are more than 40,000 American soldiers in Iraq, all of whom must leave the country by that year-end pullout deadline according to a 2008 security pact penned between Baghdad and Washington.

Of course, nothing is ever really final.  There is a pending extension that would keep a small number of U.S. troops in Iraq if Baghdad decides further U.S. military training and assistance is needed to bolster a beleaguered Iraqi Army.  But no arrangement has been finalized as of yet. 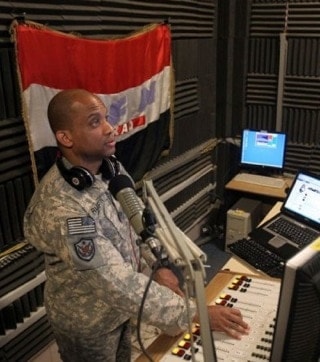 As for the radio station, it has turned over its broadcasting responsibilities to AFN-Europe, which is based in Germany.

Commenting on this change, Sergeant Townsend said, “They’re going to get good radio, but it’s not going to be us, and we’re right here in the country with them.”  He added, “We get mortars, and we get rockets, and we go out on missions and patrols as well, so at least we have something in common.”

The importance of really connecting with the troops was critical to the mission of the station.  According to the AFP article, the staff described the station as being a “morale force multiplier.”

Sergeant First Class Don Dees, who headed AFN broadcasts in Iraq, spoke of the criticality of disseminating information during a protracted occupation mission, like Operation New Dawn.   Sergeant First Class Dees told the AFP, “It’s important to entertain and boost the morale, but we exist to inform, to educate and help, ensure that all of our troops have the context to know what it is we’re working so hard for.”

In the end, it wasn’t always pretty but it was a job well done on all fronts for our military men and women serving in Iraq.  They killed one of the most ruthless dictators of the 20th Century and in the process promoted the democratization of a failed state. It’s now time for the Iraqi people to really take hold of the reins and turn their fledgling nation into a thriving democracy.

Oh, and the song choice for the last song to be played at AFN-Iraq was voted on by listeners.

The winning/most-requested song was: Courtesy of the Red, White and Blue by Toby Keith.