Franklin Armory’s got a unique new product on their hands.  Thanks to a close reading of firearms law, they’ve made an AR “firearm” that is neither a pistol nor a rifle because of its exact lengths and two-handed design.  And each one comes with a letter from the ATF giving it their blessing.

The XO-26b is somewhere between a high-end stock AR-15 and entry-level custom AR-15 in terms of features.  It’s got Magpul furniture, an A2 flash hider, an A4 flattop rail and matching railed gas block, (sights not included) a barrel with a 1:7 twist for big bullets, and it’s chambered in 5.56 NATO.  Franklin Armory’s toyed around with other chamberings and while we think that .450 Bushmaster’s a little extreme, we do like the idea of this in 7.62x39mm.  The MSRP isn’t terrible at $1150.

Really, the thing that makes it stand out isn’t its furniture, it’s how expertly it threads the legal needle.

There are three things that make it neither pistol nor rifle nor any other weapon (AOW).  First, it has a forward pistol grip.  This means that it is not intended to be fired single-handedly (FPS Russia notwithstanding).  The reason it’s not a short-barreled rifle (SBR) is that overall, the firearm’s length is still over 26 inches with its buffer tube extension and and not concealable by ATF standards.  They liken it to the Thompson Model 1927-A5 which also has a short barrel.  But the barrel slides in at 11.5 inches, which brings it in under the AOW standard of having a 12-inch or longer barrel with an overall length of less than 26 inches. 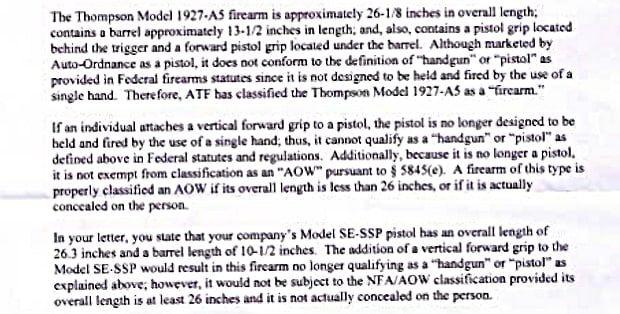 Franklin Armory is playing it safe with their padded buffer tube, but a cursory read of the law indicates that it should be legal to put a real stock on it provided it doesn’t shorten the length of the firearm to under 26 inches:

“TITLE 18, PART I, CHAPTER 44, § 921, Definition (8) The term ‘short-barreled rifle’ means a rifle having one or more barrels less than sixteen inches in length and any weapon made from a rifle (whether by alteration, modification, or otherwise) if such weapon, as modified, has an overall length of less than twenty-six inches.”

But we’re not lawyers so would anyone like to confirm or deny this for us? From the horse’s mouth, Franklin Armory: you put a buttstock on it, it’s an SBR.  That’s what the ATF says it is, and that’s what it becomes. There is a silver lining.  You can buy this “firearm” before you apply for a tax stamp to convert it from a handgun to a short-barreled rifle, that way you can have your gun and shoot it, too.

And question number two: knowing this, would you build a “firearm” of your own with a sub-12″ barrel, forward pistol grip, and overall length of over 26″, or would you just get a Franklin Armory gun for the ATF letter?