This is pretty boss.

So the dude walks in, gloved and masked, ’cause he knows he’s going to be on video and all that, and immediately this kid’s figured out something’s up.

Now it would have been perfectly fine if he’d run outside and called for help.  That, too, would have been exceptional and quick-thinking, and yeah, we don’t like it when kids put themselves at risk, but he went all Karate Kid on this robber, who clearly was caught off-guard.

But we gotta give props where props is due.  First he levers the guy’s arm up and the handgun over his head, and wails on the dude’s gut.  When the man running the shop starts to move out from behind the counter.  The robber can’t do a thing with the kid messing around with his gun arm, and the man, who’s probably the kid’s dad and hopefully out several gallons of ice cream now, gives the robber a shove and they lock him out.

He got away, right?  Albeit without stealing anything and having the shame of literally getting his ass thrown out by a hundred pound kid, but it gets better.  That video went viral in Turkey, where the robbery attempt took place, and people in the neighborhood identified a potential suspect, who since has been confirmed as the robber as Mustafa S., and arrested him.

His junk hasn’t dropped, but x-rays have confirmed that it is in fact admiralty brass, a high-copper brass similar to cartridge brass but with better corrosion resistance. 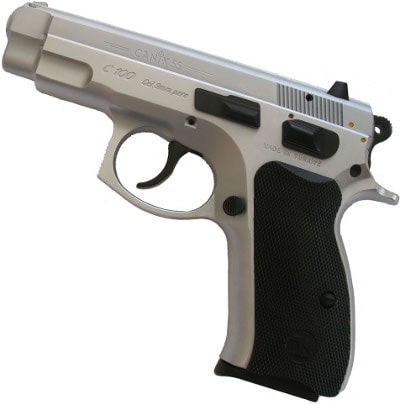 Can anyone tell us what the gun used was?  Canik, maybe?  We don’t know much about Canik pistols apart from the fact that they are both Turkish and follow a highly-successful Czech pattern that we really like.