Troop Survey: Was The War On Terror in Afghanistan and Iraq Worth It?

There are many ways to evaluate the two-front War on Terror in Iraq and Afghanistan.  Yet, at the end of the day, there’s one question that seems to take precedence over everything else: was it all worth it?

A new report released this week by the Pew Research Center asked both veterans and members of the public that question, in addition to other questions that inquire about the costs and benefits of war.  The results were telling.

Here is a recap of the key findings of the report (courtesy of MSNBC): 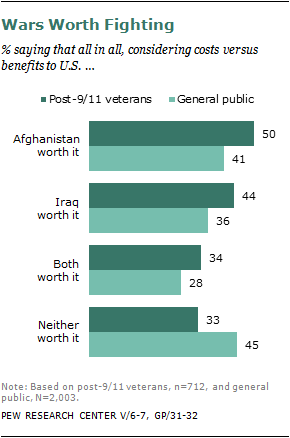 •    Forty-four percent of post-9/11 veterans report that they have had difficulties readjusting to civilian life, and 37 percent say that — whether or not they have been diagnosed – they have suffered from post-traumatic stress.

•    Eighty-four percent of these modern-era veterans say the general American public has little or no understanding of the problems they face, with 71 percent of the public agreeing.

•    Overall, 16 percent of post-9/11 veterans report they were seriously injured while serving in the military, and most of the injuries were combat-related. Forty-seven percent say they know and have served with someone who was killed while in the military.

•    Many Americans agree that since the terror attacks in the U.S., the military and their families have made more sacrifices than the general public. But even among this group, only 26 percent say this gap is “unfair,” while 70 percent say that it’s “just part of being in the military”.

•    A vast majority expressed pride in the troops and three-quarters say they thanked someone in the military. But a 45 percent plurality say neither of the post-9/11 wars has been worth the cost and only a quarter say they are following news of the wars closely. Half of the public said the wars have made little difference in their lives. 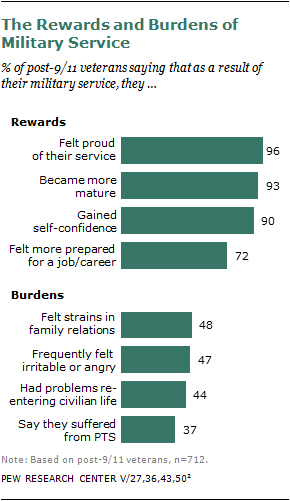 •    About half (51 percent) of post-9/11 veterans say that the use of military force to fight terrorism creates hatred that breeds more terrorism; 40 percent say it is the best way to defeat terrorism. These views are nearly identical to those of the general public.

•    When asked about the draft, both veterans and the public agreed: The nation should not bring back the military draft, which was ended in 1973. Among post-9/11 veterans, 82 percent said they’re against reinstating the draft, compared with 66 percent of pre-9/11 era veterans and 74 percent of the general public.

For the report, Pew surveyed 1,853 veterans, including 712 who served in the military following the September 11 attacks.  Of the 712 post-9/11 veterans, 336 served in either Iraq or Afghanistan.  Pew also surveyed 2,003 adult members of the general public.

The Pew Research Center is a self-described “nonpartisan, ‘fact tank,’” dedicated to providing “information on the issues, attitudes and trends shaping America and the world.”

Do you believe the two-front War on Terror was worth it?

Here are a few additional facts to consider:

– The combined costs of the wars have reached upwards of $1 Trillion.

– There has not been a successful, large-scale terrorist attack on U.S. soil since 9/11.

– According to the Heritage Foundation, “at least 40 terror plots against the U.S. have been foiled since 9/11.” 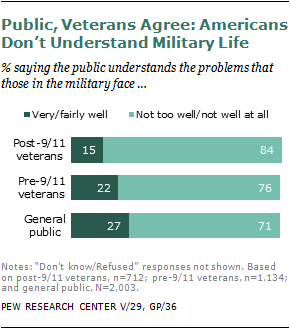 I don’t know if at this point I can answer the question, “was it worth it?”   To be perfectly honest, I don’t think I’m in a position to answer that question.  I never served in the military.  I think if anything this report serves as a reminder to all of us who haven’t served that there is a lot we have to learn about the sacrifices that were made on our behalf before we make a decision one way or the other.

One of the authors of the study, Paul Taylor, stated the following, “There is some registration that there is a gap in understanding, a gap in experience,” Taylor said. “The veterans have borne the burdens of war but come back with emotional and psychological challenges to a country that does not understand them.”

This is certainly true.  We, members of the general public, lack experience and understanding as to what the true costs of war are.  And without knowing these true costs, it is almost impossible to provide an informed answer to that question.

However, I do know this.  Our military men and women are the best in the world.  And they did what they were asked to do with honor and an unspeakably high level of professionalism.  They deserve our unconditional support and gratitude.