Earlier this year, Bushmaster shut down.  “The Freedom Group, which owns Bushmaster along with other gun giants such as Remington, Marlin and a grab bag of other companies with a foot in defense manufacturing, announced the closing of Bushmaster’s Windham, ME plant beginning March 31, 2011.”  Which sucked.  Bushmaster was one of the major manufactures of AR rifles and the ACR, Magpul’s eye-catching and ill-fated potential M4 replacement.

Bushmasters have been standard issue service rifles for police forces and other local agencies; their no-frills designs offering flexibility and low price have always had a municipal appeal. 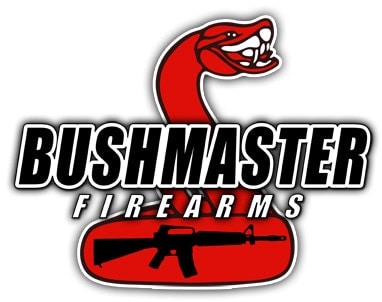 Which is why we were happy to hear that they’re back.  “When Remington i.e. The Freedom Group i.e. Cerberus Capital Management i.e. a New York City equity firm hoovered up Bushmaster in 2006 they basically took the head but left the brain, turning what was once it’s own idea mill into essentially a brand-name for Remington and in the aftermath, a group of investors captained by Richard Dyke—the unfortunately named, genius behind Bushmaster 1.0—saw the potential.  With a gun manufacturing facility sitting vacant and a town full of gunmakers (many of which had over 25 years of experience crafting American made, American owned rifles) all the pieces were there to buy the plant back from Remington and, well, basically just make another Bushmaster.” 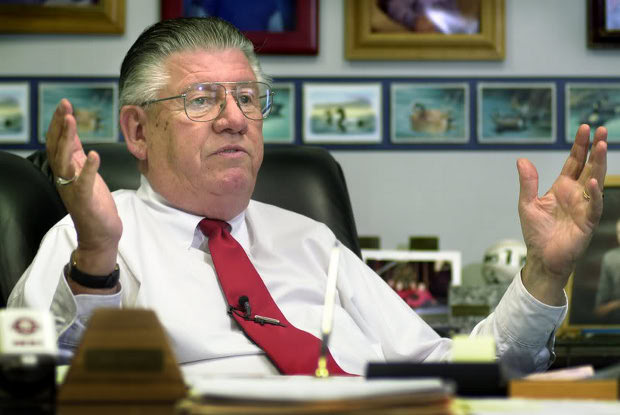 And yeah, the guy’s name is Dick Dyke.  Can’t be helped.  (Say he doesn’t look like one Mr. Dick Dyke.)  Windham Weaponry’s also an appropriate moniker, as the whole facility’s in Windham, Maine. 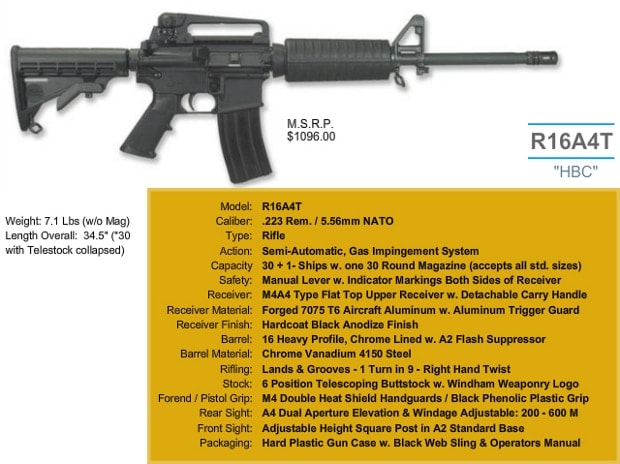 They’re off to a solid vanilla start (which probably the best way to go) with affordable-but-not-cheap carbines in three models, the R16M4A4T, or MPC for short, is a straight-up sporterized M4, and comes with a standard carrying handle rear sight and a one-piece front sight gas block.  The R16M4FTT, or SRC, is a slicker version without factory sights, but a flat-top railed gas block, so you can customize it however you like. 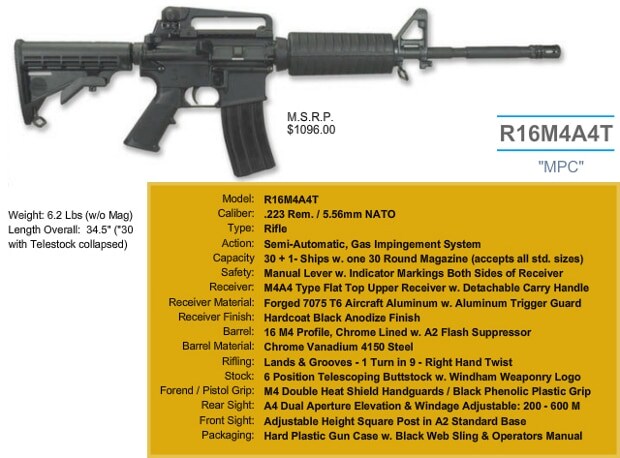 They also have a heavy-profile-barreled carbine with standard sights, the R16A4T, or HBC.  Catchy names as ever could be.  All have MSRPs between $1000-1100, and retail prices about $800.  They’re all available now. 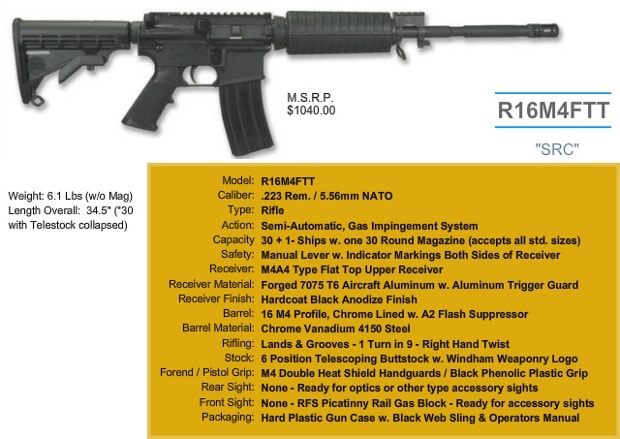 Windham is working on more variants, too.  Because what they’ve got looks solid, but besides being made in the U.S.A. and having a great pedigree, they’re not particularly special, like the Bushmaster’s we’ve grown accustomed to.  Still, as they say, we wouldn’t kick them out of bed for eating crackers.  Plus they’ve got a lifetime, transferable warranty.  If you buy one used or decide to sell it, the subsequent owner(s) will get all the same benefits as if they’d purchased it new.