Wrong-Headed Lawsuits Against Gun-makers Ultimately Hurt all of Us

According to most sources within the FBI and law enforcement communities across the country, Americans use guns defensively more than two million times a year, and 98 percent of the time merely brandishing a firearm is sufficient to stop an attack. Resistance with a gun is also the safest course of action when a person is confronted by a potentially violent criminal. Those same sources indicate that the chances of serious injury from an attack are 2.5 times greater for women offering no resistance than those resisting with a firearm. And firearms help bridge the strength differential between male violent offenders and their female victims.

In my own personal experiences, both as a law enforcement officer and an employee of the government, I have found that higher gun-ownership rates are associated with lower crime rates and recent reports appear to also indicate a correlation.  Furthermore, I believe that poor people in the highest crime areas benefit the most from gun ownership. Unfortunately, lawsuits against gun makers do nothing more than to raise the price of firearms, which in turn will reduce gun ownership most among the law-abiding poor. 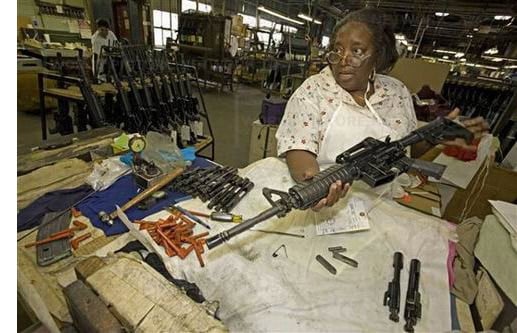 Lawsuits against gun makers are also at odds with the wisdom of the very people whose job it is to keep the streets safe. The police cannot feasibly protect everybody all the time, and indeed, despite their importance in reducing crime, they almost always arrive on the scene after a crime has already been committed. Perhaps that is why police officers by and large (and I’m speaking from my experience as a cop here) are sympathetic to private gun ownership. Surveys of 15,000 police chiefs and sheriffs conducted by the National Association of Chiefs of Police found that nearly 94 percent of them thought law-abiding citizens should be able to purchase guns for self-defense.

Over recent years, however, the authors of lawsuits have accused a number of gun makers of specifically designing guns that appeal to gang members. Similar suits, notably funded by philanthropist George Soros and the Brady Campaign, have been brought about in New Orleans, Chicago and New York. Among the offending characteristics cited in the suits were low prices, small size and light weight, easy concealability and high firepower.

If this looks like a laundry list of what you’re looking for in gun, well, I’m guessing you can get in line with the rest of the gun-owning world.  These stabs at the gun industry are incredibly uninformed.  They are not critical of say the marketing of the gun, where there may be well be some indication of the company actively pursuing a criminal market (though with gun sales what they are, pretty unlikely), but instead they imply the very function of a gun itself is a means to court criminals.

Well, I hate to tell them this but, a gun is suppose to shoot bullets and while lightweight, concealable guns may help criminals commit crimes, they also protect law-abiding citizens in all the states that allow concealed carry. Women in particular find it easier to use smaller, lightweight guns. And while some criminals may value guns for their greater firepower, so do their potential victims, who are more likely to be the lone mark confronted by a gang of attackers. Granted, undercover police officers posing as inner-city gang members have, time and again, demonstrated that they can purchase weapons illegally, even from supposedly “law abiding” gun shops.  But criminal penalties already exist for such sales, and they are between seller and buyer and that’s not what these manufacturer lawsuits are about at all. Their intent is to make gun manufacturers pay large awards to cities for any harm produced by their product.

Some have contended that this is nothing more than holding bars liable for serving too many drinks to people who later get into automobile accidents. Yet those drunk driver cases deal exclusively with retailers, not manufacturers. Anheuser Bush is not in the dock! If that line of rational were to proceed, perhaps the next prey for litigant-happy trial lawyers in drunk driving cases will be the automobile companies. Some lawsuits against gun makers seek reimbursement for accidental gun-related deaths, but surely lawsuits against alcohol companies and possibly even beef producers will be next. After all, those products too have cost lives.

Law-abiding citizens have the right to purchase firearms and, if need be, to use them for self-defense. Lawsuits against gun manufacturers hurt all of us. You do not sue Budweiser because of the drunk driver. Likewise, Colt or Smith & Wesson should not be sued because a criminal may have used one of those firearms.