Yesterday, Gov. Jerry Brown signed Assembly Bill 144 into law – the California open carry ban.  Starting Jan 1st openly carrying a handgun (whether loaded or unloaded) is a misdemeanor offense, with offenders facing up to one year in jail and a potential fine of $1,000.

Although Brown has admitted in the past that he is in fact a gun owner, he signed AB 144 into law at the behest of law enforcement officials including Los Angeles Police Chief Charlie Beck and Los Angeles County Sheriff Lee Baca who publicly supported the ban.

I listened to the California police chiefs,” Brown said in a statement.

The ban’s author Assemblyman Anthony Portantino (D-La Canada Flintridge) felt as though his efforts in getting this legislation passed have thwarted an inevitable disaster. 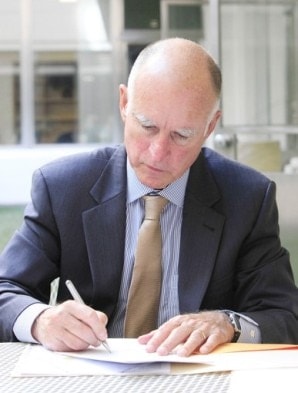 Now that the ban has passed, Portantino feels California is no longer the “wild west.”

“The bottom line is the streets will be safer for law enforcement and families,” Portantino said.

Echoing Portantino’s thoughts was Brian Malte, director of state legislation for the Brady Campaign to Prevent Gun Violence, he told the LA Times, “This finally puts an end to the dangerous and intimidating practice of carrying openly displayed guns in public.”

Malte added, “California families will now be able to take their families to the park or out to eat without the worry of getting shot by some untrained, unscreened, self-appointed vigilante.”

The ban certainly has its fair share of critics.  For example, State Assemblyman Tim Donnelly, (R-Hesperia), told reporters, “There are risks to living in a free state, and for the governor to take away and chisel away at the Second Amendment right when he claimed to respect it, it just kind of shows his true colors.”

“It’s really a form of tyranny,” Donnelly said of the ban.