We all know gun sales are going through the roof, and new gun designs are being released at machine gun speeds.  Part of this is due to the increasing availability of concealed-carry licensing, but another part is simply the phenomenon that is this ongoing renaissance in the shooting world.  Despite dreary projections in 2008 by the NSSF, many shooting sports are seeing an increase in participants and not just practical shooting sports or “tactical mindset”-based gun conditioning.

Yeah, classy sports are coming back, too, with all the shattered clay pigeons that portends.  Trap, skeet, down-the-line, even Nordic trap is getting played a whole lot more, (and we don’t even know what Nordic trap is, all we can think of is that something like this weaponized fish must be involved) and the guns of these clay pigeon games are equally classy. The guns used are just as specialized as any outlaw-class race gun for speed shooting, but yet, they’re often double-barreled shotguns.  Like Browning’s Citori 725s.  New additions to their Citori line tendered in 12-gauge, the 725s use a modified, shorter, smaller receiver to cut down on overall weight, but ultimately to make it a “low profile” receiver: the recoil impulse is redirected down along the comb of the stock with a low profile receiver, instead of straight back, which results in a shotgun with less felt recoil.

It’s got another recoil-reducing feature, which is a buttpad that crushes upwards, pushing the gun downwards along with the recoil.  The majority of its features are part and parcel with the Citori line, like its brass-rung chokes that prevent lead and crap buildup between the choke and the barrel, the barrel being made of high-strength steel in order to handle all-steel shot, and having extended forcing cones for both reduced barrel and shot stress. 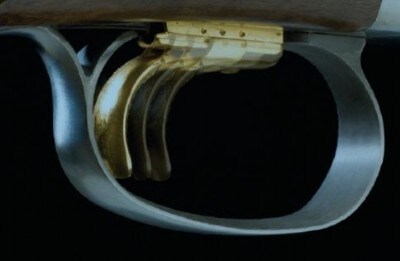 The trigger is easily modified with supplied interchangeable trigger shoes to tune it to your liking, but the greatest feature has to be its lockup.  “Unlike other low-profile over and unders, the Citori 725 features a transverse-mounted, full-width tapered locking bolt and full-width hinge pin to maintain the legendary Browning strength and reliability counted on for generations. The locking bolt engages a full-width tapered recess in the rear barrel lugs. Tapering the bolt and recess allows the bolt to seat deeper, accommodating for wear. Unlike guns with side-mounted trunnions, the 725’s hinge pin extends the full width of the receiver for maximum strength. Like the original Citori, the 725 is engineered to wear in, not out.”

The Citori 725s two models are both distinguished, but one is a little more distinguished than the other.  By that, we mean it’s got a gold filigree.  By the way, that should let you know that you’re paying for some really expensive quality firearms, here.  Neither precious metal-engravings nor the most precise engineering come cheap.

The 725 Field is the more practical over/under, with ivory front and mid-bead sights and barrels measuring either 26 or 28 inches.  They come with three standard chokes, (full, modified, improved cylinder) and the Sporting has fiber optic sights, 28-, 30-, or 32-inch ported barrels, and two more chokes, (improved modified, skeet).  They start at about two grand.