Trijicon is old hat when it comes to combat and sporting optics.  Their many lines of military-grade, combat-tested optics have earned them a permanent place in operators’ hearts everywhere.  Their specialty, besides making extremely tough optics, is unconventional illumination.  They’re very well-known for their reflex sights and scopes that are powered by both fiber-optic and tritium gas illuminators, although that’s not knocking their electrical-powered optics. 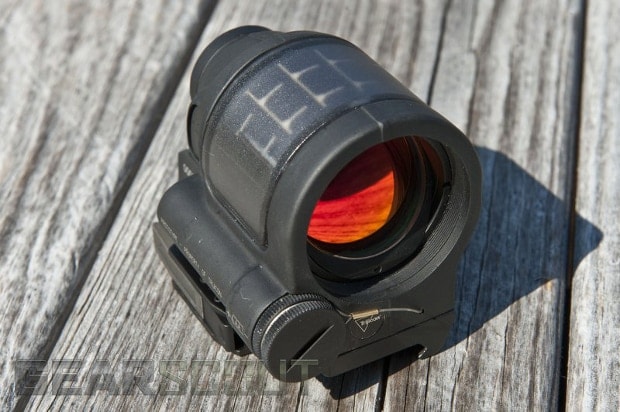 Trijicon has made several red dot sights, usually as a backup for their other optics, and these are intended to be mounted on their scopes, such as their ACOGs.  But this is perhaps their best primary red dot sight ever: the SRS.  It is in direct competition with the ubiquitous Aimpoint CompM4.  (That should give you an idea of the price, by the way.  $7-800.) 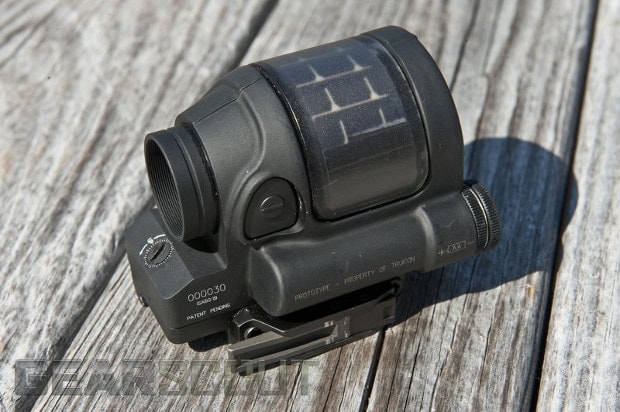 Like the Aimpoint CompM4, it’s a tube-style red dot sight that runs off battery power.  The comparison ends there.  The SRS is also solar-powered, and will even run without a battery in adequate light.  At an “average” brightnesses, the SRS claims it will run for three years on a single AA cell.  It supports automatic as well as manual brightness settings, three of which are compatible with night vision. 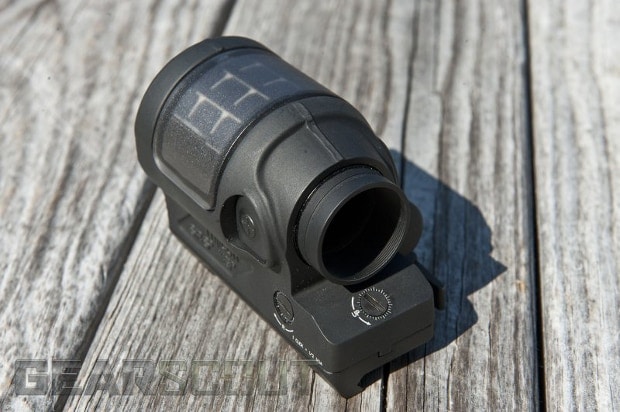 The thing that makes the SRS stand out the most though, beyond its technical aspects, is its field of view.  The optic, at 38mm at the objective lens, is huge.  There’s no sense that you’re looking through a tunnel.  It’s also shorter and has thinner outer walls, so it obscures far less with a both-eyes-open sight picture.

“I had a few hours on the range with the new optic last week and found one of the greatest features of the SRS is the near elimination of tube effect. That’s the feeling that you have to look through a tube to see the red dot reticle and the target area past it. The SRS’s tube is far shorter that the CompM4 and it’s field of view is about 2.5 times more. What’s more, looking at the sight from the cheekweld, the outside walls of the sight are thinner, allowing you to look through the sight with one eye and see what’s past it with the other easily. End result- way more situational awareness than looking through at narrow tube.” 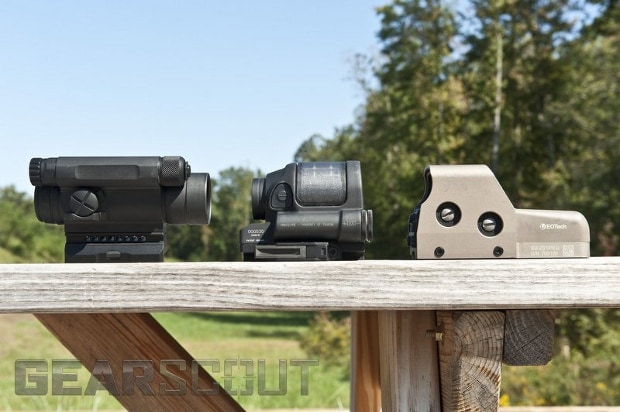 Sighting in the 1.75 MOA dot doesn’t require special tools as the elevation and windage knobs can be dialed with shell cases, or pretty much anything else you have with your guns’ toolkit.  It also snaps into place with a Bobro self-adjusting quick-detach mount.

Although it’s more compact and streamlined than the CompM4, it does weigh about an ounce more.  Of course, the SRS is built taller than the Aimpoint, which often requires a riser to line up with a proper cheek weld on an AR-pattern rifle; once you add a riser to the CompM4, they weigh the same.

The SRS, which is due for a launch following the 2012 SHOT Show, is shaping up to be one hell of a gunfighter’s optic, and it single-handedly justifies our Picatinny love.

We’ll have to wait ’til next January to get more info on this slick-looking optic, like its price, for example, so until then, here’s how it stacks up against the above competition:

We still guess that the price is gonna be up there.  But once the first, military-grade SRSs get made, we also expect there to be some trickling down of the technology; it would be really nice to have one that’s affordable if less, say, waterproof.