OK.   It was zombies all along.  You know what?  We here know our zombies, and Hornady, damn you, Hornady, you could have done better.

Hang on.  Taking a step back, Hornady released this cryptic ad a couple a’ days ago.  It was a teaser for this longer video:

We can pick nits off that all day long.  Mixing slow and fast zombies, a panicky survivor losing his calm, wasting time and ammo taking body shots, a guy with a custom, slide-lightened STI competition gun and a full-auto M4—what are the chances of either having that equipment and it being handy in a z-day scenario—and the survivor’s generally chiseled and manicured looks.  And that’s just the short.

You could’ve done something much cooler, Hornady, and that’s what we’re going to call you on.  We like you guys on the whole and hope your marketing scheme goes great.  But it’s just marketing and not innovation, capitalizing on a 21st-centry retromeme and releasing zombie-themed ammo right before Halloween… it’s just a smart ad campaign, not a entirely new product unto itself. 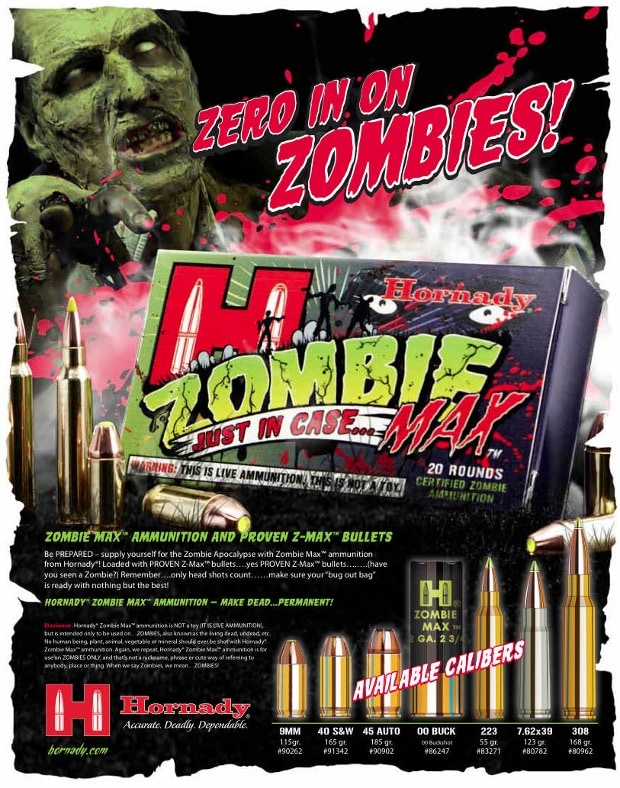 Zombie ammo should be a real thing.  Not because we’re afraid of zombies but because we understand that they embody a certain set of concerns we as a collective have about the inherent fragility of our society.  Zombies are a supervirus, a superquake, and a superflood all in one.  They’re a fictional way to remind ourselves to be prepared.  And that isn’t simply a matter of owning a gun and having ammo for it.

Z-Max ammo should have played a card from the CDC’s deck.  It wouldn’t be too hard.  Instead of ammo coming in boxes of 25, 20, or 10, it should have come in spam cans.  An airtight case with 500 rounds of rifle ammo, 750 pistol, or 250 shells, minimum.  The cans could also include a spare gun cleaning kit, a hundred feet of paracord, an instruction booklet on how to make cool shit with paracord, bandaids, fishhooks, matches, and a flare gun, all sealed up to last a century.  And then slap a guarantee on it: the contents of this spam can of ammo are guaranteed to the year 2111 if not opened prior to immediate use.  (Who’s gonna actually complain after a century?)

Ask yourself: would you be more likely to spend $300 on zombie-themed ammo, or $300 on a spam can stuffed full of lead security blanket?