Were our founding fathers the gun-loving, pro-second amendment patriots we’ve imagined them to be or did they have a more nuanced position when it came to reconciling the Second Amendment with gun control?

This is one of the questions that Adam Winkler, a UCLA Law Professor, investigates in his new book, Gunfight: The Battle Over the Right to Bear Arms in America.

And his answer to that question is, at the very least, compelling.  Winkler argues that “gun rights and gun control are not only compatible; they have lived together since the birth of America.”

Winkler goes on to say, “The founding fathers instituted gun control laws so intrusive that no self-respecting member of today’s N.R.A. board of directors would support them. Early Americans denied the right to gun ownership even to law-abiding people if they failed a political test of loyalty to the Revolution. The founders also declared that free white men were members of the militia and, as such, were forced to appear with their guns at public ‘musters’ where government officials would inspect the weapons and register them on public rolls. When pressing public necessity demanded it, the founding fathers were also willing to impress guns from law abiding citizens, even if those citizens were left without guns to defend themselves from a criminal attack.” 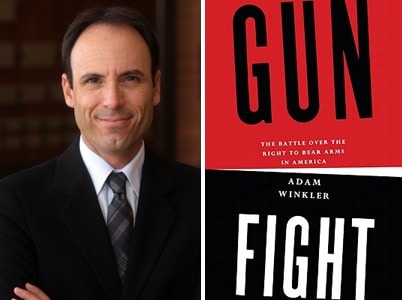 Winkler cites some examples of the more strict and extreme regulations the founders supported.  He writes, “they supported forcible disarmament of slaves, free blacks, and people of mixed race out of fear that these groups would use guns to revolt against slave masters,” and in Maryland, before the revolution, “at least one colony, Maryland, passed a law barring Catholics from possessing firearms.”

The theme of his book is consistent, that the founding fathers “understood that gun rights had to be balanced with public safety needs.”

According to Winkler, this is something we’ve moved away from in recent years.  He argues that zealots on either side of the issue have dominated the gun control/gun rights debate.  It seems as though in today’s fractured political landscape, people are either for complete confiscation or complete freedom.

Winkler points to the evolution of the NRA, an organization that wasn’t always so staunchly opposed to gun control.

He writes (and this is from a HuffPo article), “In researching my book, Gunfight: The Battle over the Right to Bear Arms in America, I discovered that the NRA used to be far more open-minded on gun control — and, amazingly, paid almost no attention whatsoever to the Second Amendment…”

Here is a better synopsis of what Winkler is referring to with respect to the NRA’s earlier position on gun control:

The old NRA also promoted gun control. In the 1920s, NRA leaders helped draft the Uniform Firearms Act — model legislation for states to adopt that established new, restrictive rules on carrying firearms in public. Karl Frederick, the NRA’s president, said at the time, “I have never believed in the general practice of carrying weapons… I think it should be sharply restricted and only under licenses.” The Uniform Firearms Act only awarded licenses to “suitable” persons with a “proper reason” for carrying and created a waiting period before a newly purchased handgun could be delivered to the purchaser. Today’s NRA, by contrast, fights to eliminate these very same requirements.

The NRA also endorsed the first major federal gun control law of the modern era, the National Firearms Act of 1934. During hearings on the proposed legislation, which imposed heavy restrictions on machine guns and other gangster weapons, Karl Frederick was asked how the Second Amendment affected this groundbreaking law. His answer was astounding: “I have not given it any study from that point of view.”

Protection for guns “lies in an enlightened public sentiment and in intelligent legislative action,” Frederick wrote elsewhere. “It is not to be found in the Constitution.”

Obviously the NRA has changed their stance since then.  Some would argue they’ve had to.  After all, it’s one thing to support “intelligent legislative action” and it’s quite another to support some of the gun control laws that have been filed in recent years.  Consider, for example, the D.C. handgun ban that was eventually declared unconstitutional by the Supreme Court in the 2008 Heller decision – was that an enlightened law that accurately reflected public sentiment?  Or how about California’s ban on open carry, which was signed by Gov. Jerry Brown last week – is this an example of “intelligent legislative action”?

The reason why the NRA has been, to some extent, overrun by “hardliners” is because many feel that the extremism coming from the left has warranted extremism from the right.  Fight fire with fire so to speak.

Surely, it can be argued that the complete polarization of this issue, and really any issue, is not good for the public.  It’s clear that both sides mistrust each other and, as a result, there’s little, if any, common ground.  Both sides fear that if one gives up an inch, the other is going to try to take a mile.

The truth is that there are probably some gun regulations that make sense to review and reform.  For example, we could probably shore up the National Instant Criminal Background Check System.  Looking at the psychological profile of spree-shooters, it’s clear that many of them have had serious mental issues.  And the question then becomes, is there a more efficient way to screen individuals for mental illnesses (that doesn’t jeopardize the rights of responsible gun-owners)?

We may have an answer to this question.  That answer may be in the form of legislative action coupled with a more streamlined database.  However, how could any law-abiding gun owner support any gun control measure, no matter how much sense it makes, in a climate of fringe politics and extremism?  It’s a lose-lose situation.  One puts at risk not only his/her reputation within the gun community, but also risks exposing himself/herself to more gun control laws down the road.

If there’s anything we can learn from Winkler’s book and our founding fathers with respect to gun control, it’s that civility and common sense should always be at the fore of the debate.  Something we’ve moved away from in the past few decades.