Norway law enforcement officers of the Politiets Fellesforbund union were surveyed and 60 percent of them said they did not want to be armed at all times.  Current policy is that they only arm themselves when exigent circumstances arise.

“We want to have a police force that can handle the most demanding assignments with the least amount of force,” Arne Johannessen, who is head of the union, told Norwegian Broadcasting (NRK) this past week.

Johannessen said that after reviewing the poll results, speaking with weapons experts and investigating how armed law enforcement agencies operate in other countries, the union had decided that it would be best to uphold the current policy and maintain a standard practice of unarmed patrols.

However, those who voted in favor of the current policy did so provided several conditions are satisfied, such as more officers on call and/or at the ready and increased access to weapons.

“We must have easier access to weapons when we’re in a dangerous situation,” Johannessen told NRK. “That means having weapons storage in all police districts, both one- and two-handed weapons, and revision of weapon instruction in Norway.”

Johannessen is also leading the charge for rule changes in national law enforcement procedure that would permit lower-ranking police officers to approve the use of arms (current policy reserves that decision for local police chiefs only). 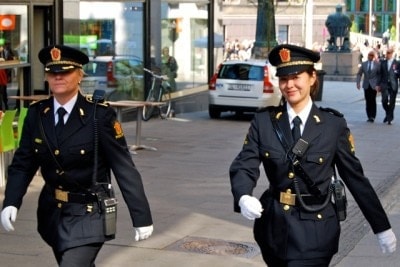 What’s shocking about this whole ‘effective, but unarmed’ movement is that it comes on the heels of the worst spree shooting/terrorist attack in Norway’s history.  This past July Anders Behring Breivik bombed a government building, which resulted in the death of 8 people, then fled to a youth summer camp on Utoeya Island where he shot and killed 69 people.

It has been argued that Anders specifically targeted the island because, in addition to being a left-leaning retreat, it was an “easy target.”

One would think that in the wake of this tragedy Norway would seek reform to require officers to carry firearms at all times.  Moreover, one could also reason that Norway should seek legislation that would ensure the individual’s right to protect himself/herself via concealed carry.  Had Anders met early resistance from law-abiding gun owners lives may have been saved.

Yet, instead, it is apparent that Norway is shifting in the opposite direction.  While Johannessen proudly touts the “civil image” his police officers are preserving by remaining unarmed, Norway legislators are considering gun laws that would further restrict the rights of responsible gun owners.