“Effective October 1st, a state law was passed that allowed for individuals who are licensed concealed weapons permit holders to bring firearms into the state capitol,” said Heather Smith, spokesperson with the Florida Department of Law Enforcement.

Of course, there are certain conditions and restrictions that apply.  The first is individuals with a CCW permit may not bring their sidearm into legislative meetings or into the building when the legislature is in session.  The second condition is CCW permits must be shown to Capitol Police upon entry.  Officials say that metal detectors will be used at both the House and Senate chamber galleries to ensure compliance. 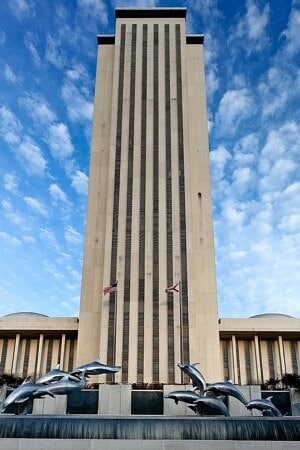 Not everyone is pleased with the new law.  Several visitors and state workers voiced concern.

“You have these guards, checking everyone coming in the door, so that people inside the building will be safe,” visitor Laura Aniello, told TTXL.com “and yet, you’re allowing people to come in with weapons, it doesn’t make any sense?”

Another visitor, Michael Betti, told local reporters “Why would anyone ever need to bring a gun into a state capitol building?  I don’t get it.  It’s stupid.”

“Tempers flare and folks get frustrated by laws that maybe passing or look like they may pass or have passed and you know I think if we can’t have guns at public meetings, we shouldn’t have them at the state capitol,” he told TTXL.com.

But proponents of the new law are quick to mollify concerns.

“People who are licensed by the state have been through background checks, they know where they can and cannot carry, they’re law abiding people, they’ve never caused a problem and they won’t cause a problem now,” said NRA spokesperson Marion Hammer.

If there’s a “right track” to follow with respect to gun laws and gun rights, Florida seems to be on it.  They have passed the “stand your ground” law, which allows a citizen to use deadly force outside the home if he/she feels his/her life is in danger, they now allow firearms into state capitol buildings and in January lawmakers will consider bringing back firing squads (admittedly, not really related to “gun rights” or “gun owners” but something I thought I’d mention for good measure).

What’s next on the agenda?

Well, hopefully lawmakers and residents work together to find a way to square away their open carry rights, something that continues to be a sore spot for gun owners.