Why Hunt Alligators in South Carolina?

South Carolina’s gator season popped up on my radar innocuously enough while the Charleston project was still just a glint in its daddy’s eye.  It all stemmed from the naïve question, “Hey are there alligators in South Carolina?”  and, once confirmed, the inevitable follow-up, “Wonder if they hunt them?”  There are, and, since 2008, they have.

If you were unaware of a South Carolina gator season, well, don’t you fret because you can count yourself among the many: as it stands, most folks don’t readily think of South Carolina as a destination for alligator hunting (and there is some indication, South Carolinians don’t mind this).  It’s a combination of things, chief among them being, this is only the fourth year sportsmen, near and far, have had the opportunity to take swamp creatures in the Palmetto state.

Probably a more persistent factor though is the state sits in the northern shadow of some gator hunting giants, the biggest name among them being Florida.  Florida, with no closed gator season, two gators per permit, 4000 tags at its disposal, dolled out on a first come first serve basis, and highly permissive private land laws (badges, we don’t need no stinking badges), appears on paper to be the safest bet for leisure hunters looking to put a dinosaur in their parlor room.

Nonetheless, I have seen firsthand some very compelling reasons to hunt South Carolina, and for you to see them too, all you’ve got to do is take a look at South Carolina and Alligator mississippiensis’ bittersweet history. 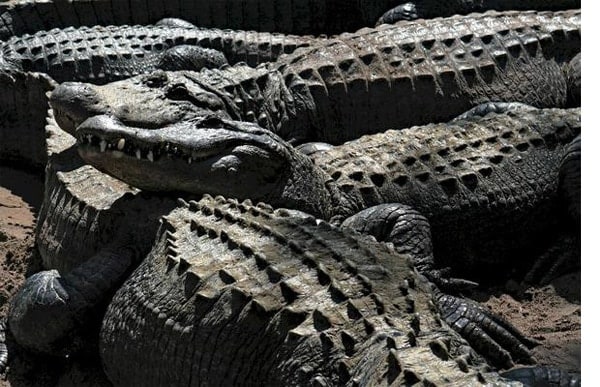 Throughout the first half of 20th century, the American alligator took an epic pummeling courtesy of the usual cast of characters: loss of habitat, over harvesting, mis-management, well meaning turn of the century ignorance.  By the 60s, the iconic swamp thing was on the ropes, showing its lowest population levels since people started paying attention to that sort of thing.

So low in fact, the government was pressured to step in and, pursuant to a freshly inked Endangered Species Act, both state and federal agencies oversaw a highly successful recovery program lasting 30 years from 1967.  By 1987, alligator populations had recovered to such degree that their “total protection” designation was deemed unnecessary and this is wherein the fundamental difference lies.

In 1988, the state of Florida, whose population had come back in a big, irritating way, gave it’s blessing on the first statewide season.  Louisiana, with a current estimated gator population of around 1.5 million, didn’t even wait that long, sanctioning a season the year the animals lost protection status.  Others weren’t so eager.  Georgia waited until 2003, Mississippi 2005, Alabama 2006, and Arkansas 2007.  And, never one to be told what to do by the Federalis, the state of Texas set up two seasons, one in the fall and one in the spring, established in 1984 and 2007 respectively.

So, South Carolina is special in that it’s the newest member of the gator hunting club, but it’s also special in that, the state took measures to curb the decline of its alligator populations before 1967, with DNR literature citing efforts to spread word of the animals eminent demise in the early 60s.  The sum total is this: South Carolina’s alligator population, which the lab coats put at a modest 100,000 specimens, has not been hunted in any sort of meaningful way for well over 40 years and with alligators continuing to grow throughout their entire lives, the result is that what the state lacks in quantity, it potentially makes up for in quality.

But there’s more to this theory than just a bunch of empty speculation about rebounded critters: there’s science behind it.  Or at least scientific speculation.  I’ll explain.

To call the American alligator one tough SOB is an understatement and, though not as aggressive as their equatorial cousin, the crocodile, they do hold some distinct advantages over this competitor.  Where as crocodiles get pretty finicky when temperatures drop, so finicky in fact they usually can’t come up for air and drown in water less than 50 degrees, alligators show no sign of discomfort in waters below 45 °F, and it’s for this very reason alligators have spread as far north as they have and dominate the sub-tropics in the face of a larger species present to the south.

This adaptation is important when you consider the findings of a recent research effort, conducted by the Southeast Ecological Science Center.  This study indicates that temperature is an important though previously neglected factor in a favorable environment for large gators.

In Florida, where the study was conducted, alligators face high, ambient temperatures unlike anywhere else in their range. Being a cold-blooded animal, these raised temperatures translate into a significantly higher metabolism and an increased metabolic cost in the pursuit of prey.

What does all this mean? Though the population size may be greater, gators in warmer climates show reduced sizes overall in length, a significantly reduced length to weight ratio and a delayed onset of sexual maturity as compared alligators farther north.

The study acknowledges that low food availability is in part to blame due to competition, but the chief culprit is sustained high temperatures which correlate directly to an alligators ability to maintain gains in growth.

And these speculations, by several accounts, appear to be reality.  In 2010, a Massachusetts woman made big waves after she pulled a 1,025 pound, 13.5 foot goliath from Berkeley County waters.   The alligator was estimated to be somewhere between 60 and 80 years old.  The Tail and Scale crew we hunted with in South Carolina told us stories about reports of massive 14-foot gators, with thickness rather than length appearing to be greater in South Carolina gators in comparison to examples further south.

So there’s an incentive right there for trophy hunters, but why should the rest of us? I can finish your thought for you.

Aside from being a cunning and exciting animal to pursue, you should hunt them for eats.  Alligator is delicious and, contrary to the tired line about it tasting like chicken, it has a flavor all its own, meant to be savored by the most enlightened amongst us.

First of all, it’s lean as it comes white meat (there is red meat on the animal around the arms and torso which some gator hunters stew but these cuts are usually used to feed alligators rather than people). It’s the massive, weaponized tail that gator hunters go gaga over.  The flavor is mild, but hangs on the palette with a delicate fish taste and a texture that is pleasant but, for the indoctrinated, unmistakably reptile.  Believe it or not, it goes well with white wine.

My granny, may she rest in peace, told me to never trust a picky eater.  Eating alligator seems to me to be proof positive of this—if you’re grossed out, I’ve got little patience for you.

So there you have it, some pretty good reason to give the Palmetto State a second look the next time you get a hankering to do the dinosaur.  Plus it’s not as hot and sticky.

(Photo by Dan Brown at the Summerville Journal Scene)