GeorgiaCarry.org is embroiled in a legal battle with the 11th Circuit Court of Appeals in Atlanta over whether licensed, law-abiding gun owners should be allowed to carry firearms into churches, synagogues, mosques and other places of worship after Georgia lawmakers banned them from doing so in 2010.

Georgia is part of a small group of states (Arkansas, Mississippi and North Dakota) that have passed laws in recent years to keep guns out of places of worship.

According to reports, so far the three-judge panel presiding over the suit has been tough on GeorgiaCarry.org attorney John Monroe and his argument for lifting the guns-in-church ban.  The judges cited several legal issues that seem to undermine Monroe’s argument.  The most obvious issue is how a guns-in-church ban violates an individual’s constitutionally protected religious freedoms.

At one point during the hearing, the Circuit Judge Ed Carnes asked Monroe whether there was a Commandment in the Bible that called for guns in churches.  He asked if Monroe or his client, Rev. Jonathan Wilkins of the Baptist Tabernacle of Thomaston, were arguing that the Bible said: “Thou shalt have the right to bring a gun to church?”

Monroe answered that his client often cited quotes from scripture that undergirded his position with respect to firearms and self-defense, but was unable to offer those quotes at the hearing.

Meanwhile, state attorney Laura Lones argued that the current ban is only minimally restrictive; it allows for gun owners to bring their firearms into places of worship provided they have permission and keep the weapons secured.  This is a rather liberal take on the ban.  And Judge Canes called it a “creative” interpretation of the statute, according to reports.

Critics of the ban argue that they are not looking to force any church into doing something it doesn’t want to do.  Rather, they just want the churches to have the option to make the decision for itself.

“We’re not trying to force churches to allow guns in their sanctuary,” Kelly Kennett, president of GeorgiaCarry.org, told the Associated Press, “Churches should be treated like any other private property owner. Why are you treating people at churches differently than how you’d be treated at a store, at a bank, at a club?” 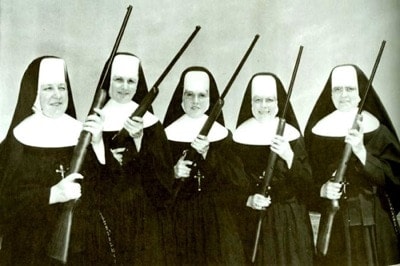 However, several religious leaders maintain that peace and safety are a priority at religious institutions.

“I think that by continuing to arm ourselves we’re perpetuating this cycle of violence that only ends up hurting the whole society. And faith communities in particular should have the right to say no weapons in this place,” said Pastor Bradley Schmeling of St. John’s Lutheran Church in Atlanta.

“It seems to me that churches and synagogues and mosques ought to be able to be places of peace, because our society needs that,” he told the AP.

The judges will render the decision in the coming weeks.  And if the ban is upheld, GeorgiaCarry.org officials said they would consider bringing their case before the U.S. Supreme Court.

Yet, they may not need to, as this suit is just one of several concurrent efforts by Atlanta gun owners to overturn the ban.  There are two proposals being reviewed by the state legislature that, if passed, would loosen restrictions or possibly overturn the guns-in-church ban altogether.