Rome Sweet Rome: One Marine Battalion against the Greatest Empire of All Time (Video)

Rome at its peak had at its fingertips a quality of life, a state of security, and a level of technology that in many ways, would not be matched for nearly two millennia.  After the assassination of Julius Caesar, under Caesar Augustus, Rome only expanded and solidified its social and military might.

What would happen if a present-day Marine battalion woke up just outside Rome, year 23 B.C.?

Rome Sweet Rome is a movie currently getting under weigh, backed by Warner Brothers.  The cool and curious story is how it got started.  In an Internet forum, Reddit.  Some guy posted his idea and fleshed it out in a handful of posts, neatly illustrating the events following the uncanny appearance of 2,200 Marines, 150 Air Force specialists, 60 Afghani soldiers, 15 contractors, and one civilian to the doorstep of ancient Rome.

“At noon, two Sea Knight helicopters roar over Rome at 12,000 feet. Stunned, the pilots swoop in lower and lower. After a half-hour of sightseeing, coming in as low as 1,000 feet, they can no longer deny the evidence of their eyes – this is not the place or time they had occupied the day before. They leave to report. Behind them, they leave a city in chaos, as terrified Romans flee the awful creatures in the sky. Sacrificial pyres fill the city with smoke, and priests of every religion shout in the streets.”

Of course, if they all just smiled and shook hands, that wouldn’t be a movie about the Marines, now would it? 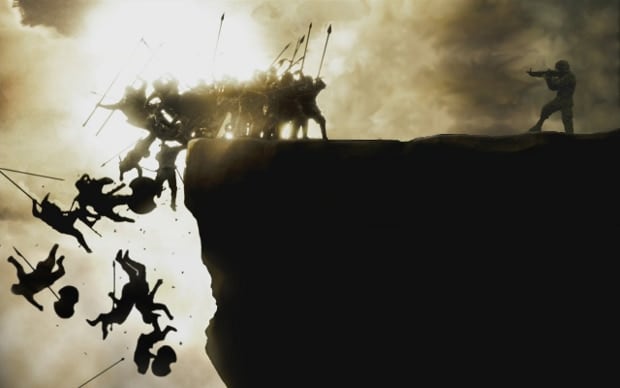 “Sergeant McCandless watches the Romans advance, ignoring his warning shots and calls to halt. Their swords are drawn. He does not know the range of a Roman bow. He only knows that they are closing. He doesn’t know what kind of weapons they have. He doesn’t know how to talk to them. His nerves are frayed after four days without sleep, nightmares about his family ripping him out of the few minutes he can eke out before taking another go-pill. 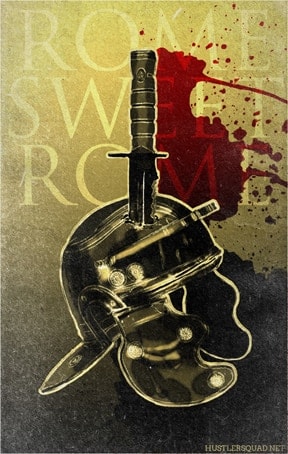 “The bullets arc forward. Marine marksmanship is the finest this world has ever seen, and Bassus and his men, trotting forward six abreast, make a fine target. They all drop.

A few days after the first installment, the users of Reddit helped the author tune and correct his piece.  The guy, James Erwin, is a history guy, and as it turns out, is writing a book on ancient Rome due next year, not to mention he’s also won Jeopardy, twice.

In the handful of weeks that followed, the story became more than just a collection of posts.  It got its own section of Reddit, and readers and fans were contributing posters, book cover designs, even movie trailers.  A producer came across the website and urged WB “aggressively” to acquire the rights, which they did.

And now we’re going crazy with anticipation.  How long does it take to make a movie?  Will they get the Marines to hook them up with equipment and tactics?  How awesome will this wind up being, super-awesome or hella-awesome?

So yeah, great things can come from hanging out in forums.  Our forum has yet to land a movie deal, but it has earned people T-shirts and guns—so really, it’s not a waste of office hours, spending time in Internet forums is an investment.