Since the late 80s and early 90s the Lord’s Resistance Army (LRA) has been terrorizing central Africa.  Under the direction of its leader Joseph Kony, the nomadic rebel group has killed or maimed tens of thousands of people, raped an untold number of women, kidnapped thousands of children (using them as sex slaves or brainwashing them to fight with the LRA), and displaced millions more. 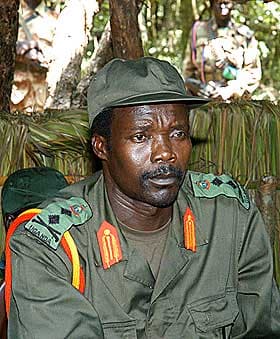 Over the years there have been several efforts to mobilize a counter-attack against the LRA.  In 2006, an eight-man team of US-trained Guatemalan commandos set out to assassinate Kony and destroy the LRA.

The team entered the LRA camp, but noticed Kony wasn’t there.  A firefight broke out and the LRA killed the entire eight-man team.  To make a statement the LRA beheaded the team leader.

In 2009, the U.S. helped orchestrate a military offensive conducted by Ugandan, South Sudan and Congolese forces.  The offensive was codenamed “Operation Lightning Thunder,” and consisted of a series of coordinated airstrikes and ground assaults on known LRA positions.

However, the targeted attacks were poorly executed and most of the LRA rebels fled into the forest unscathed.  As the LRA retreated, they murdered more than 600 civilians.

In addition to providing military guidance from afar, in the past three years the US has given Uganda $33 million to revamp its military and increase the pressure on the LRA.

But it hasn’t been enough.  Kony and his rebel group have continued marauding and murdering innocents.

Last week, President Obama announced that he is sending 100 US combat-ready troops into Africa to help regional forces capture or kill Kony and the senior leaders of the LRA.

“Although the U.S. forces are combat-equipped, they will only be providing information, advice and assistance to partner nation forces,” Obama said. “They will not themselves engage LRA forces unless necessary for self-defense.”

Obama explained his reasoning for the deployment in a letter to House Speaker John Boehner (R-Ohio).

President Obama also noted in his letter that the deployment of troops is in accordance with the “Lord’s Resistance Army Disarmament and Northern Uganda Recovery Act,” which was signed into law on May 24, 2010.

“Congress also expressed support for increased, comprehensive U.S. efforts to help mitigate and eliminate the threat posed by the LRA to civilians and regional stability,” Obama said in the letter.