We’ve all heard the saying, “when one door closes, another door opens.”  Well, this is the attitude some Californians (myself included) have taken toward AB 144, California’s open-carry handgun ban for unloaded firearms (it was already illegal to carry a loaded handgun) that was signed into law a few weeks ago by Gov. Jerry Brown and will go into effect Jan 1.

What we are hoping for, and what was illustrated in yesterday’s article, “Hope in Fresno: Police Chief and City Councilman Want More People Carrying Concealed” is that this new open carry ban will force state and local lawmakers to reconsider the strict conditions that need to be satisfied for one to obtain a CCW permit.

California is a “May Issue” state, meaning to obtain a CCW permit in California one has to gain permission from a County Sheriff or Police Chief, which typically involves demonstrating that he/she is “at risk” or he/she works in a potentially dangerous profession (security guard). 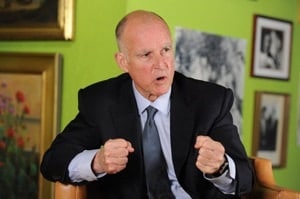 The problem with this process is that it’s subjective.  Whether or not one receives a CCW permit is up to the sole discretion of a law enforcement official.  There’s no standard licensing policy or objective criteria that grants an individual a CCW permit in California.

What made this subjective licensing process tolerable (at least to some of us) was the fact that Californians still had the right to carry openly, albeit an unloaded handgun.  Now that that right has been stripped away form us, it raises questions about our Second Amendment rights.

Basically, if we can no longer carry openly and if it’s next to impossible for regular, law-abiding Californians to obtain a CCW permit due to the “May Issue” licensing process, then are our Second Amendment rights being infringed?

From this question/dilemma, two things will likely happen.

The first is already happening in Fresno.  That is in an effort to step up crime prevention, local Sheriffs and Police Chiefs may lobby for legislation that creates a more streamlined CCW process, one that takes the discretionary mandate out of the licensing requirements and conditions.  This would in turn make California, at least in some cities and counties, a de facto “Shall Issue” state.

The second thing is that a lawsuit may be filed (if one hasn’t been filed already) that challenges the constitutionality of the open carry handgun ban and California’s “May Issue” licensing process.

So while supporters of AB 144, like California Brady Campaign President Dallas Stout, continue to applaud Gov. Brown for his “common sense and real courage,” what they don’t recognize is that while they closed the door for open carry, they (re)opened the door for concealed carry.