This golden Belgian-made Browning Hi Power is going to be a lasting symbol of Lybia’s independence.  Gilded with a gold filigree, the handgun taken from him might as well be the gun that killed him.  Even if it was not literally the gun used to slay him (although how perfect would that be) it reflects Gaddafi’s decadence and violence quite well, and shows how it had all been turned against him. 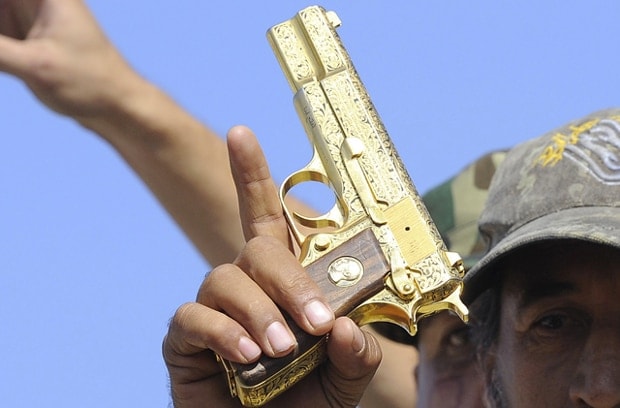 After a NATO air strike on a convoy, a group of young rebels quickly rushed in to investigate the site, and found the wounded Gaddafi in a sewer drain.  “Well, all that has changed. Yesterday, as the despot made a mad dash out of hiding in Sirte, NATO warplanes smashed his convoy. With most of his meager forces destroyed, the dictator managed to escape and hid in a culvert next to the roadway.”  He wouldn’t go much further.  No trial.  Just a shot to the head.

“They had the ultimate trophies of the revolution: the colonel’s golden gun, his satellite phone, his brown scarf and one black boot.”  Many hundreds of gold-plated objects were found in Gaddafi’s possession, not just guns like this trophy Dragunov. 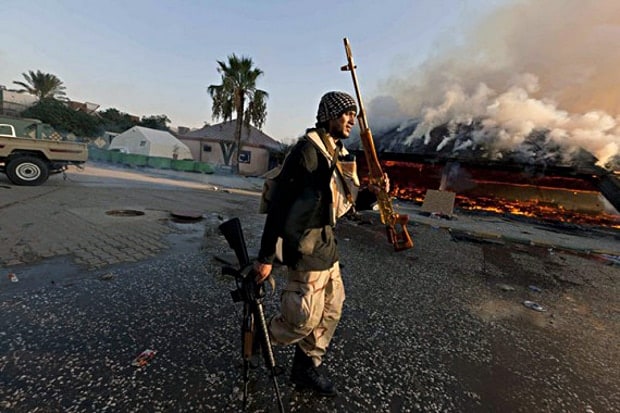 From the Telegraph: “Gaddafi loved gold: he had a flyswatter with a gold elephant on top, kept gilded statues of himself, used a goldplated tea trolley, and commissioned a gold chaise-longue in the shape of a mermaid with his daughter Aisha’s face.

“Karen Pine, professor of psychology at the University of Hertfordshire, said Gaddafi’s interior design principle was ‘bigger, better, with more gold on.'”

Well, let’s send him off the American way: with a Hitler Rant.