Guns.com in Charleston: Guns for Self-Defense – Looking at the Numbers

There’s a multitude of reasons as to why a person owns a gun and we’ve seen several examples so far while on our mission to discover What are guns to Charleston and Charleston to guns? Although people do shoot recreationally and competitively, there are really only two practical uses for firearms: hunting and self-defense. I mean that’s what they were created for in the first place.

And South Carolina has its fair share of hunters, concealed weapon permit holders, and gun owners overall. So perhaps one of the best ways to figure out the answer to our question is to ask, “Why are people in Charleston buying guns?” 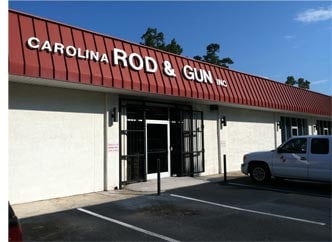 To answer that question I headed down to talk with Scott Hornsby, store manager of Carolina Rod and Gun, with 30 plus years in business it’s one of the oldest gun and sport stores in Charleston. Hornsby has worked at Rod and Gun since 1990, and he said he’s seen the market flip from predominantly hunting sales to more self-defense oriented sales.

And there are statistics this show this is true. Hunting and hunters have been on the decline. According to the National Survey of Fishing, Hunting and Wildlife-Associated Recreation, which collects data from all 50 states every five years, the Palmetto state actually lost registered hunters. In 2001 there were 221,000 and by 2006 that number fell drastically to 159,000 (before 2001 it remained constant). Unfortunately the data isn’t out yet for 2011, but due to the troubling economy one could guess it either plateaued or continued to decline. And the Low Country, where Charleston is located, has prime hunting ground.

So somewhere in the last decade is where the switch happened. Again you can blame the economy for the loss of hunting permits, but bear in mind people are still buying guns. The market hasn’t been hurt at all in fact gun ownership has been on the rise. There’s just been a decline in hunting permits.

So let’s look at the other side of that coin. Are people buying guns for self-defense?

According to the South Carolina Law Enforcement Division (SLED), which keeps track of the state’s crime records, South Carolina has a slightly above average crime rate. *Statistics from 2009. Crime rate is calculated by Number of Crimes x 10,000/population (if they didn’t use this scale the numbers would be incredibly low and hard to read).

Violent crimes include murder, rape, and aggravated assault, but I’ve also included robbery. Let’s break those down by the numbers.

So what one can conclude from the statistics is that criminals in Charleston will:
•    Know the victim
•    Murder and rob with a gun
•    Rape a minor
•    Assault by hitting
•    Rob outside of the home

The next question that comes to mind is, Are these numbers something to be concerned about? Well one thing to keep in mind, Charleston is one of the largest counties in the state with 350,209 people and with more people means more reported crimes. And another thing is the crime rate has dropped. The national crime rate along with South Carolina’s has steadily declined since it peaked in the 90s.

But it isn’t my place to interpret the data and that’s not really what this article is about. I just wanted to show you that crime is down.

So my next question is: Since crime is down, are people really buying guns for safety?

When I was inside Rod and Gun, before Hornsby and I began talking, he was helping a lady who looked to be in her 30s. She inquired about the Taurus Judge even though she had never fired a gun before, but she had heard that the Judge was a good for self-defense. She really wanted one to keep on her nightstand next to her bed. Well, after looking at it and talking about it for several minutes, ultimately she didn’t buy it. “Not yet,” she said. She laughed and smiled, I could tell that, although the idea was there, she wasn’t fearful.

One of my first questions was about that interaction. I asked Hornsby, “Do you get customers like that a lot?”

And he said, “Yes. People come in and look and we try to give them what they want.”

Then I asked for his opinion on the Judge, knowing it’s marketed as a self-defense weapon, but reviewers say it’s better for killing snakes.

He laughed and said, “It’s gimmicky. I wouldn’t recommend it for self-defense, but people like it.” Then he added, “When someone hasn’t fired a gun before and wants one for self-defense, I try to suggest something moderately priced and good. Like a Ruger P95.”

I asked him, “Who are most of your clients?”

“A lot of clients are police and business owners.”

Then I asked him to tell me about the changes he’s noticed in the gun world since he started working at Rod and Gun.

He explained to me, “We didn’t always carry handguns. Before all we did was hunting, but at that time the economy was still cranking. Around ’97 AR shooting became popular. Then, also in ’97 a lot of construction contractors moved out here and started buying shotguns for hunting. Right around the time Obama was elected the market became defense oriented. People thought something would happen to the guns, but in reality nothing happened. But since then we went from selling one handgun a week to about four or five.”

If you look around the store you’ll immediately notice all the hunting gear, but then you walk up to the gun cases you’ll see a variety of brands. And, over by the register, there’s one case dedicated to nonlethal weapons.

“We don’t always suggest guns to people. For some people it’s just not a good fit. They might not be comfortable, so they’ll want pepper spray or something. Like I said, we try to give the customer what they want.”

Like I said earlier, if you ask 10 gun owners why he or she owns a gun, you’ll probably get 10 different answers. If a person in Charleston owns a gun for home defense, more than likely they won’t have a CWP. You can tell because there are only 5,209 people who do. That’s 0.015 percent of the county’s population.

So I can’t say that in Charleston guns are primarily self-defense tools because they’re not, at least, not to everyone. And I also can’t say that they’re for hunting when there aren’t that many hunters.

So our question What are Guns to Charleston and Charleston to Guns? takes us a bit further. You can’t answer every question by looking at stats and sales trends. So we headed to the range.