Miniatures and movie and television prop designer Neil Taylor, AKA Faustus, likes to make fantasy guns on the side.  But not just replicas, fantasy guns from games, in this case, BioShock, crafted in the steampunk style. 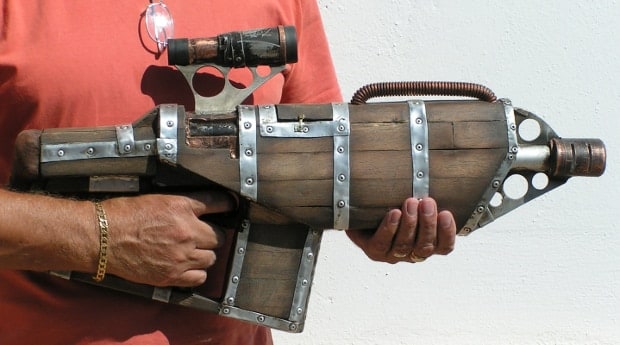 He takes a Nerf gun as its base, and replaces the exterior with reclaimed wood and rivets it all together by hand, complete with copper and brass touches, and makes something altogether new.

All the wood and aluminum is hand-cut to suit the pre-industrial mashup.  Of course, the Nerf guns still work, and despite their rebranding, run on batteries, not hot water.  This latest model uses a Nerf Barricade which uses a ten-shot revolving barrel, and includes a flip-up access panel to load and clear the gun. 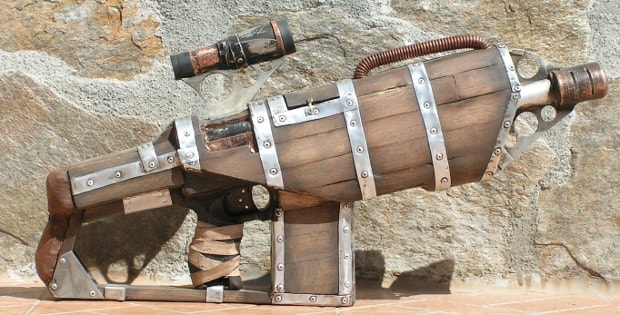 It’s not his first, or likely his last BioShock gun.  Previous Big Daddy guns have strayed from the game’s looks a bit to use Ruff Stuff Tommy Blasters with 20-round drums, but they just don’t look quite right.

Neil Taylor’s designs sometimes show up in the wild, but if you’re looking to get one of his neat little “toys” you’re better off just contacting him directly and putting in a request.  His Big Daddy guns sell for about $300, which yes, is enough to get you a real gun but decidely something you’re not allowed to shoot your kids with.

Of course, with the upcoming Bioshock Infinite coming up around the corner, we hope he takes his special talents and comes up with something more suited to life in Columbia.